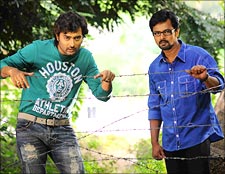 Pavithra Srinivasan feels Prasanna is one of the strengths of Muran but the film loses heavily on originality. Post YOUR reviews here!

The first thought that strikes you while watching the much anticipated Muran (Conflict), produced and distributed by director Cheran and UTV Motion Pictures and directed by newcomer Rajan Madhav is that Alfred Hitchcock must be turning in his grave!

Rajan Madhav happens to be acclaimed director Mysskin's erstwhile assistant as well. So expectations were sky-high. As to whether his debut fulfills the hype, remains to be seen.

In the beginning, though, all seems to be perfect: in an up-market hotel, you have a bearded and serious Nandha (director Cheran), an upcoming musician, complete with fashionable beard and guitar, who's trying to make a name for himself.

He's about to seal a lucrative assignment when fate takes an unexpected turn. The entire dining area comes to a halt as a drunk Arjun (Prasanna), slurring and on the verge of an emotional breakdown, threatens to jump off the multi-story building. He does, much to the consternation and shock of everyone present  -- including Nandha.

So far, it seems just like one of those coincidental meetings that happen so often in life - until Nandha and Arjun meet again, when Nandha's car breaks down during his journey, courtesy a few drunk youths on the road. Arjun, passing by, offers the musician a lift - and thereby begins an interesting tale.

It's flashbacks galore as Nandha's life-story is revealed: his is a less-than-perfect marriage, with an adulterous wife Indu (Nikita) who won't grant him a divorce; but he does have an understanding girlfriend, Lavanya (Haripriya) who is Nandha's ideal mate.

Arjun, meanwhile, is a conundrum. He lives for thrills, walks willingly in the path of buses and lorries, thinks nothing of taking the wildest risks. The reason: his father Devarajan (Jayaprakash), a successful industrialist, won't give his son the freedom and resources he desires. Besides, he's the reason for Arjun's girlfriend Linda's death.

There's nothing left for Arjun now and so he proposes the ultimate thrill: he'll kill Nandha's wife while Nandha must kill Arjun's father.

With the essential plot-point, and several key twists liberally borrowed from Alfred Hitchcock's Strangers on a Train, Muran deviates from the original only in minor details (such as showing Nandha as a musician, instead of the tennis player his character is, in the original), and having the meeting happen in a car, instead of a train.

While the first half, with its snappy dialogues and the hint of suspense goes along at a good pace, everything starts unraveling, post the interval.

The director appears to have suddenly turned indecisive, about the screenplay: the writing wanders from showing a character as negative, then positive, then negative again.

Songs and fight sequences (no matter how humorously included), do destroy the pace.

Unlike the Hitchcock original, Muran doesn't dwell much on its characters and their development, instead using a dozen twists and turns to add to the suspense. It doesn't work. Almost an hour of unnecessary twists and turns are thrown in, to "add to the suspense" but all it does it drag the screenplay along. There's none of the nail-biting suspense and heart-thumping agony of the unknown here.

Of the actors, Prasanna walks away with the honours. The man is disarmingly charming, striking the right balance between naiveté, hurt and downright villainy when the dithering screenplay allows him to, that is. He invests the dialogues with such effrontery that you can't help but applaud his talents.

Cheran, though, is a major disappointment. The man usually doesn't turn in a terrible performance, but this time, it's as though he learnt to emote from the Terminator School of Acting. With his beard covering half his face, there's little to be discerned about any of his emotions at any time. It's only his confrontations with Prasanna that provide some relief.

The heroines have precious little to do. Jayaprakash, with his very limited screen space, does a neat job.

Saajan Madhav's music doesn't linger much, expect for Idhu Varai. Padmesh's camera is slick, and non-intrusive. Arun Durairaj's editing passes muster. But then, this isn't the kind of movie that depends on technical excellence for its kudos.

Muran scores at certain points, such as Prasanna, and a smattering of scenes. It does lose, heavily, in originality. 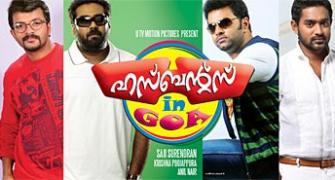 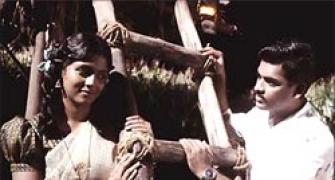 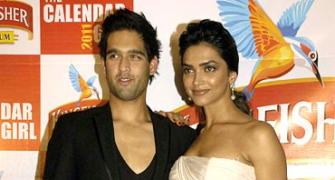 Do these celeb couples match up, lookswise? VOTE! 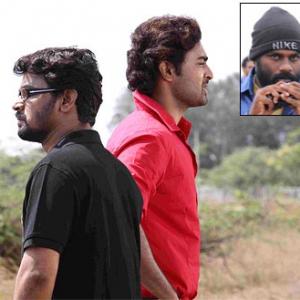 Rajan Madhav: I am really inspired by Hitchcock 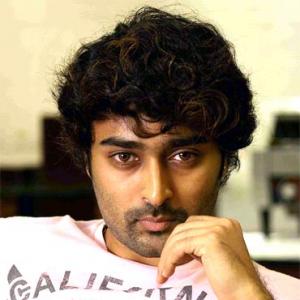 Prasanna: I felt Muran was like my own production