Kandasamy all set for bumper opening 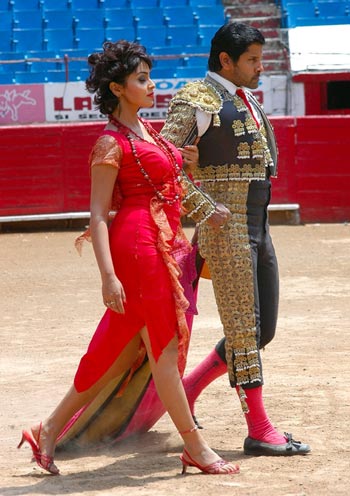 Susi Ganesan's Tamil movie Kandasamy and its Telugu version Mallana starring Vikram and Shriya are going to be released simultaneously on the 21st August not only in India but throughout the world.

With 900 prints, the film, the biggest after Rajnikanth's Sivaji and Kamal Hassan's Dasavathaaram, is creating history in Tamil.

The advance booking started on August 16 in Chennai with all tickets for the first three days sold out across 18 screens in the city. Reports say that Kandasamy has generated the same buzz in other big centres like Coimbatore, Madurai,  Tiruchchi, Vellore, Salem, Thanjavur, Erode, Karur, Tirupur and Kancheepuram. Abhirami Ramanathan, one of the top distributors of Tamil films, is reported to have purchased the distribution rights of Chennai area for a whopping Rs 4 crore.

Producer Kalaipuli Thanu is hopeful that the film will create a new record as far as the openings for Tamil films are concerned. "I am releasing the film all over the world in around  900 prints. I have given the distribution rights to well known distributors in Andhra Pradesh, Karnataka and Kerala. It will be a record for any Tamil film. Efforts are being made to dub the film in Spanish and Italian languages," said Thanu.

He has sold the distribution rights of Mallana to Dil Raju in Telangana and other well known distributors in some parts of Andhra Pradesh. Mallanna will release in 49 theatres in the twin cities of Hyderabad and Secunderabad, which is a record for any Tamil hero film except Rajnikanth. Rajni's film Sivaji, the Boss was also released in around fifty theatres in the twin cities.

Dil Raju has already undertaken massive pre-publicity work for the film and says that the film will see the kind of opening a big Telugu star gets. The film is expected to get a strong opening in Nizam, which is considered a strong distribution centre. The film will also be released with a splash in the Sarkar, Uttar Andhra and Rayalaseema areas.

And that maybe due to Vikram, who is recognised as a big star in Andhra Pradesh after the Telugu dubbed version of his much acclaimed film Pithaamagan and Anniyan became big hits. Even the dubbed versions of his weak films like Majaa and  Bheema have also been well received by the Telugu audience. The distributors of Mallana want to capitalise on the fact that it has been three years since a Vikram film has hit the screens.

The film will be released in all the major multiplexes in the the country as well as a grand release in Kerala, while in Karnataka, well known Kannada film producer Ramu has acquired the distribution rights of both the versions of the film.

Though the two films are made in different negatives, Ramu has to release the film with only 21 prints in Karnataka as the Karnataka Film Chamber of Commerce has limited the screening of non-Kannada films to just 21 theatres in the state.

In Kerala, well known distributor firm Thameens is reported to have purchased the distribution of the film by shelling out Rs 2 crore and is releasing the film in over seventy cinemas across the state.

Composing for a super hero!