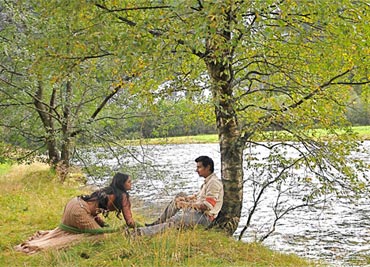 After the critically acclaimed Tamil film Kana Kanden starring Srikkanth and Prithviraj, and the commercially successful Ayan with Surya and Tamannah, the National Award-winning cinematographer K V Anand is back as a director again in 2011. The film is titled Ko.

The story is about the adventures of a photo journalist played by Jiiva.

Yes, the film is a leaf from the director's life itself.

K V Anand had worked as a photo journalist for a magazine before he became a full-fledged cinematographer.

His first independent film as a cinematographer was Priyadarshan's Thenmavin Kombathu. He won a National award for it. After that, he had cranked the camera for films like Mudhalvan, Sivaji, Khakhee, The Legend of Bhagat Singh, Josh, Nayak, and many more.

Yesteryear actress Radha's daughter Karthika is the heroine of Ko. Silambarasan was first signed as the lead but according to the grapevine, he was dropped when he wanted the heroine to be replaced.

Ajmal Ameer of Anjathe fame also plays a major role in the film.

Ko is expected to hit the screens on Valentine's Day.