It's a multi-starrer that is expected to make this Vishu on April 14 a joyous affair!

Mohanlal, Jayaram and Dileep are coming together in China Town. Director duo Rafi-Mecartin are known for their laugh riots.

Kavya Madhavan is the heroine.

The film has been shot at various locations like Ooty, Hyderabad and Goa.

"We had a great time shooting the film. The heroes play friends in the film and they shared a great friendship all along," Rafi and Mecartin say in chorus.

Mohanlal plays Mathukkutty, who is trying to reform from being a goon. Jayaram plays Zachariah, who is facing setbacks in his business. Dileep plays Binoy, who suffers a few heartbreaks in life but is still a lover boy.

The story revolves around a place called China Town in Goa, known for casinos and gambling.

Rafi-Mecartin have earlier directed comedies like Puthukkottayile Puthumanavalan, Punjabi House, Thenkashippattanam, Chathikkatha Chanthu, Pandippada and Hallo among others. Love in Singapore, which was their last venture with Mammootty as the hero, was a flop.

Alagappan is the cinematographer and Jassie Gift is the music director of the film. 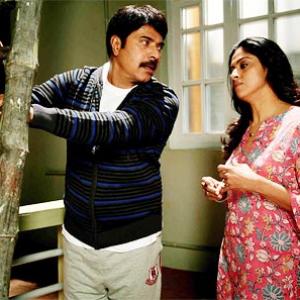