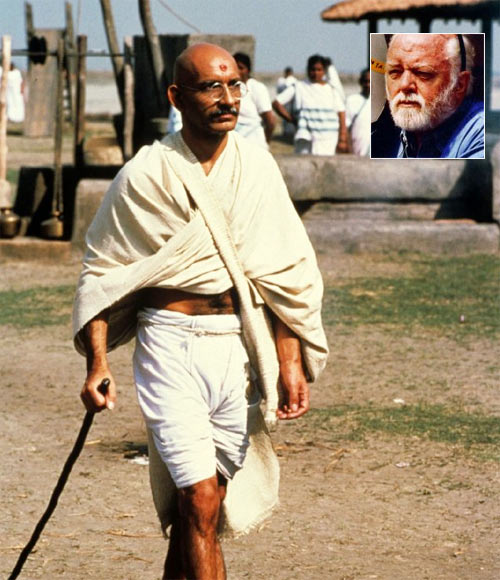 Sir Richard Attenborough, multiple award-winning filmmaker, actor and entrepreneur, passed away at the age of 90 on August 24.

Rediff.com pays tribute to the late veteran and the crown jewel in his illustrious cinematic journey -- Gandhi.


'When I despair, I remember that the way of truth and love has always won. There may be tyrants and murderers, and for a time, they can seem invincible, but in the end, they always fall. Think of it: always.'

It took actor and filmmaker Sir Richard Attenborough almost two decades to get his dream project -- capturing 50 years of the Mahatma -- Mohandas Karamchand Gandhi, based on a biography by Louis Fischer, on track.

At some point, the film was to be made by director David Lean with Alec Guiness as the lead but they got busy with another classic (Lawrence of Arabia).

Eventually, made on a budget of $22 million with the joint collaboration of investors in the United Kingdom, the United States of America and India's National Film Development Corporation, NFDC, Gandhi went on to make history.

Released on November 30, 1982, Gandhi completes 30 glorious years as one of Hollywood's most memorable biopics.

Often when one is sceptical about an unlikely casting selection it results in something special. Just like Tom Cruise playing Lestat in Interview With the Vampire and Daniel Craig's turn as 007 in Casino Royale was judged with a lot of suspicion only to be bowled over, Ben Kingsley astonished all with the best-ever portrayal of Mahatma Gandhi.

Interestingly, the actor who is half Gujarati (he was born Krishna Pandit Bhanji) not only physically transformed to look the icon, but also successfully captured his pacifist, spiritual and visionary soul.

On the challenges of casting Ben Kingsley as Gandhi 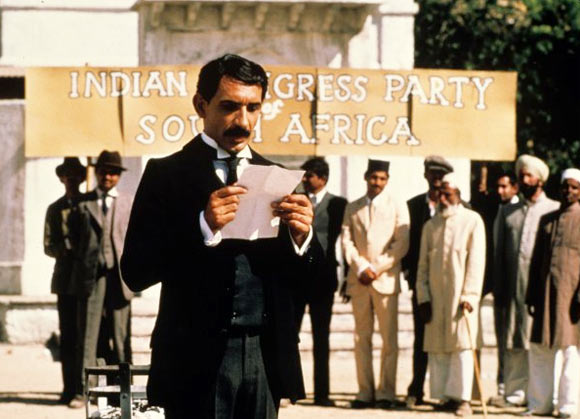 In a 1981 chat with The New York Times' Barbara Crossette, Sir Richard explains his decision to cast Kingsley, 'To attempt to play a total Caucasian as Gandhi wouldn't work. I'm equally sure that a total Indian wouldn't be acceptable to Western audiences.

'Ben is the most marvelous amalgam of all the requirements. The script brings Gandhi to life as a three-dimensional human being. It does not shirk any of the complex questions it has to touch on.'

He also revealed this fascinating last meeting with Jawaharlal Nehru (to whom the film is dedicated alongside Motilal Kothari and Lord Mountbatten) wherein the latter is believed to have told him, 'Richard, one last thing. In your film, do not deify him. He was too great a man to be turned into a god.'

How Rohini Hattangadi lost weight and arrived at the audition 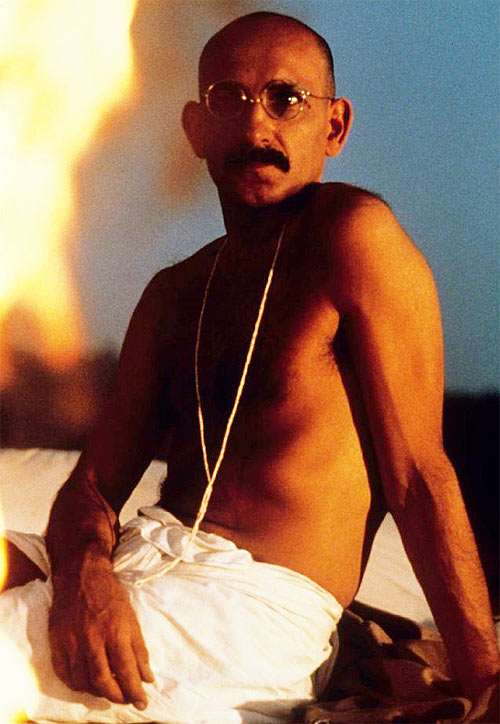 Rohini Hattangadi, who plays Kasturba Gandhi, read books like Hamari Ba and Ba Bapu Ki Sheetal Chhaya Mein to get into the skin of her character.

In an interview to The Hindu newspaper, she recalls, 'We (her husband theatre director Jaydev Hattangadi and she) didn't have a phone. One day I got a telegram from (casting director) Dolly Thakore that Richard Attenborough is in the city and is casting for the film. Go and meet him. I was reluctant, but went. He told Dolly to ask me to lose weight and come to London for the audition.

I didn't have that kind of money to spend on losing weight at a Peddar Road (in south Mumbai) clinic. Again Dolly insisted, so I did.

Then I didn't have a passport. Somehow it was managed and I went to London.'

'There I saw Naseeruddin Shah and Smita Patil and John Hurt and Bhakti Barve were already there to audition for the role of Gandhi and Kasturba.'

A journey spanning eight Oscars, one Golden Globe and a Guinness world record 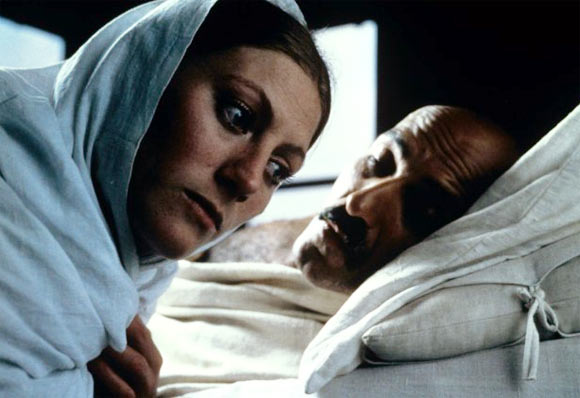 It also bagged a Golden Globe for Best Foreign Film.

The film also made an entry into the Guinness Book of World Records for the most number of 'extras' considering over 300,000 extras appeared in Bapu's funeral scene. 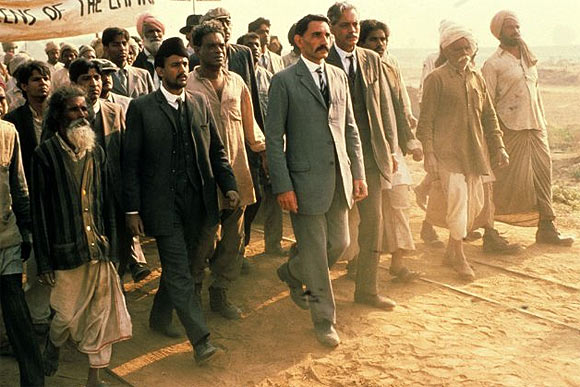 Image: One of the South African scenes from Gandhi

In 1982, Amrish Puri had nine releases ranging from the likes of Vidhaata, Shakti and Vijeta as well a brief part in Gandhi.

Before playing the ferocious and creepy chief antagonist Mola Ram in Steven Spielberg's Indiana Jones and the Temple of Doom, Amrish Puri worked as Gandhi's good-humoured friend Khan who assists him in launching a civil rights movement against the Transvaal government in South Africa. 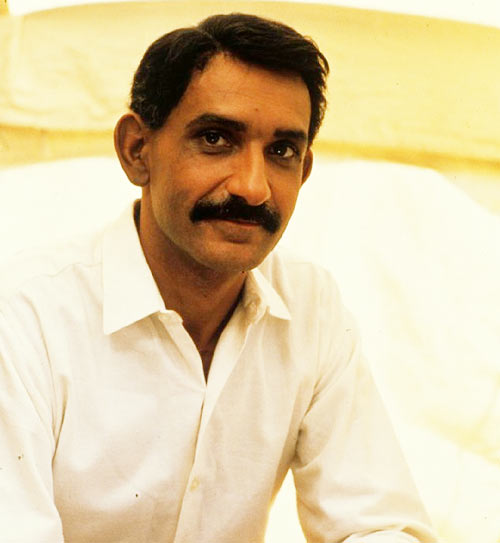 Professor Akbar S Ahmed, author of Jinnah, Pakistan and Islamic Identity, also the source for Jamil Dehlavi's film Jinnah, was rather critical of Attenborough's depiction of the founder of Pakistan.

In a 1996 chat on Rediff.com, Professor Ahmed felt, 'Jinnah (who is played by advertising personality Alyque Padamsee in the film) was shown as scowling and negative all the time. He seemed to be motivated by only one thing: His hatred of Gandhiji. This was a historically incorrect portrayal although I appreciate that a popular film takes such liberties.'

In his defence Padamsee responded, 'I'm sure Mr Ahmed that you'll understand that it is the director's interpretation of the character that the actor tries to portray, however I tried to show the pain and hurt of Jinnah, especially towards the end when Gandhi in the light of Nehru's comment Mr Jinnah, a Muslim, would never be accepted as the first prime minister of India.' 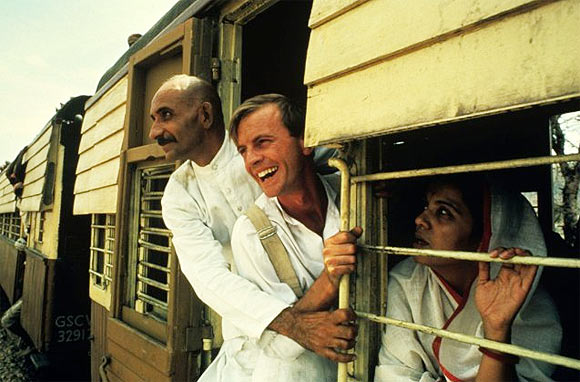 Among Attenborough's assistant directors were the likes of Govind Nihalani, John Matthew Mathan and Kamal Swaroop, who all went on to direct significant films later on in their careers. 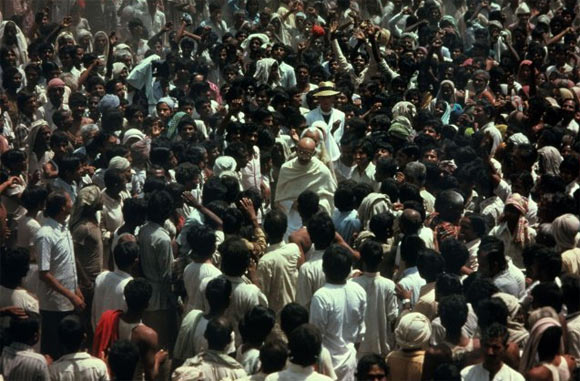 The duo were nominated along with John Williams (E.T), Jack Nitzsche (An Officer and a Gentleman), Jerry Goldsmith (Poltergeist) and Marvin Hamlisch (Sophie's Choice) but lost out to Williams. 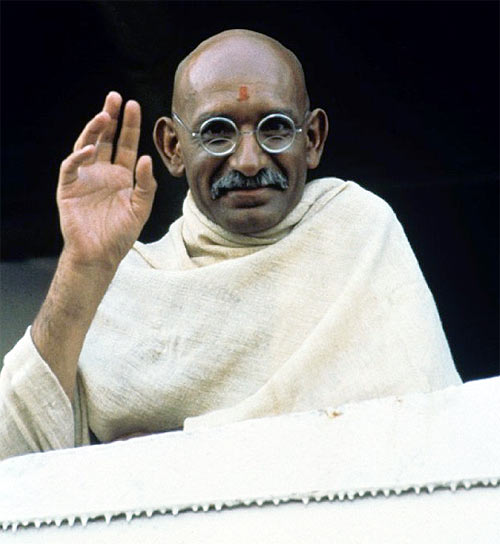 Daniel Day-Lewis, currently winning rave reviews for his performance as the Abe Lincoln in Steven Spielberg' biopic and on track for a third Oscar, featured in a bit role in Gandhi.

Day-Lewis, one of the finest actors of our times, plays a racist bully named Colin who tries to intimidate the Mahatma and his companion till he is interrupted by his feisty mother. 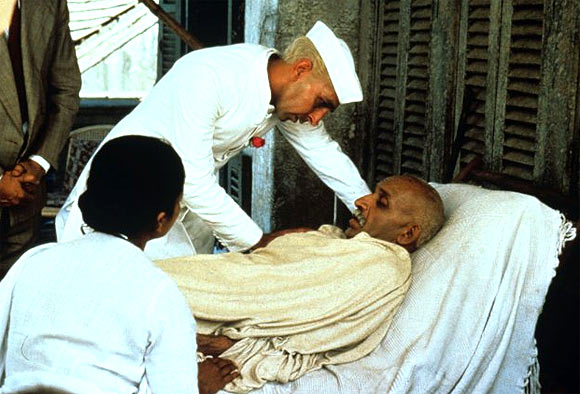 Here is what some reviews said about the epic:

'What is important about this film is not that it serves as a history lesson (although it does) but that, at a time when the threat of nuclear holocaust hangs ominously in the air, it reminds us that we are, after all, human, and thus capable of the most extraordinary and wonderful achievements, simply through the use of our imagination, our will, and our sense of right.'
--Roger Ebert, Chicago Sun-Times

'While the focus of the drama is naturally on the person of Kingsley, who gives a masterfully balanced and magnetic portrayal of Gandhi, the unusually large cast, some with only walkthrough roles, responds nobly to Attenborough's sensitive and introspective direction.'
--Variety

'Kingsley is nothing short of astonishing.'
-- Time