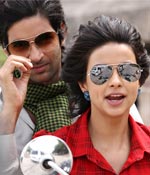 I turned 30 last week, and clearly my life isn't the kind debutant director Alankrita Srivastava would make a movie about.

I didn't open a door to forty people screaming 'surprise' and laugh like they just told me a hilarious joke, I didn't play Truth Or Dare where men confessed they'd been bad husbands but really loved their wives -- to which buddies warmly exclaimed 'Good one!,' as if another invisible gag passed me by -- and women came out of the closet, to cast a pall on all their so-called friends.

I didn't lose an advertising job in an agency where creative heads bickered using David Ogilvy quotes, and I haven't been through a broken engagement because of financial reasons. I doubt anybody has, really. And that's not just because I'm a man.

Turning 30!!! is a collection of cliches running through a harebrained script, where Gul Panag is surrounded by an impressive coterie of non-actors, even as the director vainly, even gallantly, tries to push the envelope.

So kissing is casual and frequent, the girl spoons the boy instead of the other way around, lingerie is discussed with casual ease, a woman chooses to take an extramarital affair in her stride, and sex isn't that big a deal. Kudos, lady.

What is painful, then, is not the straightforward attempt to connect to a certain audience that goes through the same things -- a niche that would like its problems discussed and even mocked, all in the name of awareness -- but the sheer, unfettered incompetence on display. 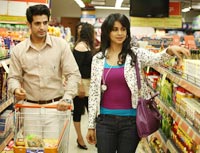 A film can't be both empowering and embarrassing -- and here the latter is painfully predominant. The problems the characters face might well be real; the film, however, is anything but.

The writing is stagey, the situations caricatured -- a breakup instantly causes rain, there is constant red wine on tap to deal with sorrow, a disgruntled girl writes a novel in her spare time -- and the acting mostly awful. Even the most pneumatic of leading ladies goes on about her inadequate bosom, simply because her character needs to suffer from every possible aging-woman platitude. Groan.

Panag manages to both cry and speak English convincingly -- the latter decidedly a major task for most of her colleagues, especially everyone at her advertising agency -- but all the characters fail to connect, engage or interest. Every one of them is based on a stereotypical one-line: an 'artistic' photographer-type, for example, earns hipster-cred exclusively through an eclectic range of scarves, and some mention of having gone to London. That's all we need to know, really.

A laughable mess, this Turning 30!!!. Maybe if it wasn't in English, it could perhaps have salvaged some credibility. Then again, the only thing it shows us is that Gul can curse a helluva lot better than Rani Mukerji did last week.