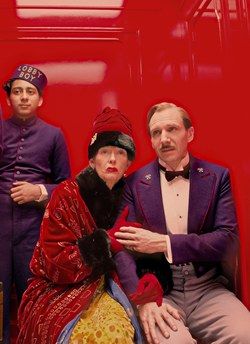 'We are blessed, that in this age of crass, commercial filmmaking, there is a special corner reserved for Wes Anderson to inhabit this wonderful, magical life.

And we thank him from the bottom of our hearts for letting us experience his dreams in full colour and grandeur,' says Aseem Chhabra after watching The Grand Budapest Hotel.

Wes Anderson must have had an amazingly colourful childhood surrounded with all kinds of characters, including eccentric uncles and aunts, and his parents must have read him many picture books.

This gentle director keeps reinventing imaginary worlds with a wonderfully wide-eyed imagination we only associate with children.

Anderson's adults are quirky, often flawed and, on rare occasions, outright evil as we see in his latest and most ambitious film -- The Grand Budapest Hotel.

But even the evil is seen from Anderson's nostalgic childhood eyes and it is most fun, almost comic book-like.

Much of Budapest Hotel -- the opening night film at the Berlin Film Festival -- centres around a fictitious grand hotel that the director and his remarkable production designer Adam Stockhausen recreated out of an 18th century department store in a small German city named Gorlitz, located along the borders with Poland and the Czech Republic.

The hotel resembles a giant wedding cake and that is no surprise since cakes have a special place in the film's narrative.

The world that Anderson, Stockhausen and cinematographer Robert Yeoman (the two have collaborated many times before with Anderson) recreate around the building comes straight out of the pop-up picture books that we enjoyed as children.

There was a special magic in those picture books, a certain smell we associate with that memory.

And that is what Budapest Hotel is all about -- dreaming up our childhood memories, which Anderson seems to live in everyday.

It is Anderson's gift to adults who are searching for the child in them.

Inspired by the works of the Austrian novelist and playwright Stefan Zweig -- a popular writer in the 1920s-1930s who is hardly known outside Europe, Budapest Hotel is a wild and crazy story within a story.
The main story -- as narrated by an elderly Zero Moustafa (F Murray Abraham) to a young writer (Jude Law) takes us back to another time.

The film itself plays with time -- moving the images from wide screen to a 16 mm format with each shot resembling the old Photochrom postcards, the look that has once again been popularised by the Instagram app in our smartphones.

Moustafa takes us to the time when he was a young illegal refugee (played with utmost charm and a straight face by Tony Revolori) having fled a war in a remote part of the world and how he became a lobby boy and the apprentice to a quirky, unpredictable concierge with a heart of gold -- Monsieur Gustav (Ralph Fiennes having so much fun after playing Lord Voldemort).

Gustav has a history of relationships with some of the hotel's old female clients.

The death of one such client -- Madame D (Tilda Swinton, in a brief appearance that she described as a costume party), leads to a wild chase of good guys and bad guys (Adrian Brody, with a crocked nose and a very violent Willem Dafoe), cops in the middle (led by Ed Norton), a beautiful girl with a scar on her face that resembles the map of Mexico, a bakery, a will that has been amended over 600 times, a painting and train journeys through snowy landscapes.

In the middle of the film there is a jailbreak led by a random prisoner Ludwig who happens to be played by Harvey Keitel.

It is the funniest and the most imaginative jailbreak -- a cleverly choreographed dance, with shadows, nibble feet and wonderful editing by Barney Pilling.

To add to the madness of it all, the film also features a secret society of keys that includes the hip desi-New Yorker Warris Ahluwalia in a bright orange turban, and his long beard.

Imagine seeing a Sikh in the middle of this crazy drama set somewhere in Eastern Europe in the 1930s? That can only happen in the parallel world of Wes Anderson.

The director has such a magnetic pull that the film is packed with actors many appearing very briefly in the film.

At the press conference after the film's screening, one journalist asked the actors what draws them to play such small roles in Anderson's films.

Murray jumped in and responded, "We are promised very long hours and low wages. You get to see the world, and we allow Wes to live this wonderful, magical life he has where his dreamscape comes through."

To that, Anderson reminded Murray about how he got to experience India, even though the actor had a small non-speaking part in The Darjeeling Limited.

We are blessed, that in this age of crass, commercial filmmaking, there is a special corner reserved for Anderson to inhabit this wonderful, magical life.

And we thank him from the bottom of our hearts for letting us experience his dreams in full colour and grandeur.