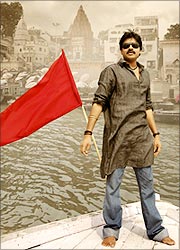 Teenmaar is largely a remake of the Hindi film Love Aaj Kal (written and directed by Imtiaz Ali) though it has been tweaked for the Telugu audience.

Director Jayanth C Paranji, who comes back to direct this Pawan Kalyan-Trisha-Kriti Kharbanda starrer after a gap, does a fairly decent job keeping the Hindi film as a reference point.

Much to the delight of Pawan's fans, he has added some songs, some scenes where Pawan showcases his culinary skills and a few Italian dialogues and some action sequences with the help of Trivikram Srinivas, who has re-written the screenplay.

Michael Velayudhan (Pawan Kalyan) is a guy, who doesn't believe much in love and marriage. His dream is to get into Mason BrickMann in Wall Street. He runs into Meera Shastri (Trisha) and they start seeing each other. He breaks up with Meera when she goes to India to be a conservation architect. Both try to move on.

Meera befriends Sudhir (Sonu Sood), son of a politician, and marries him for a day before she calls it splitsville.

Concurrently there's another love story of Arjun Balwai (Pawan Kalyan) and Vasumati (Kriti Kharbanda) set in Varanasi and Allahabad being narrated by Senapati (Paresh Rawal), who says Arjun is his close friend. Both these stories portray love in various shades. Despite moving on after the break-up, Michael and Meera can't forget each other.

There were moments when the film slows down. The length of the film is a deterrent. The movement back and forth between the retro rewind and the present may seem confusing to some people and even the notions of love as the film mentions (long distance relationship and so on). In that sense, it's an urban film.

Since it's a Pawan Kalyan film, Jayanth has ensured some action sequences showcasing his heroism where he rescues some girls from the local 'goons' are depicted. Pawan also eloquently speaks Italian. And even in the retro role, he is at ease with his 'student' role. Pawan looks good, and ably carries the film on his shoulders with his acting.

He is largely aided by Trivikram Srinivas who is at his best with his dialogues which are punchy and whacky when needed.

Trisha and Kriti made pretty pictures and acted according to the demands of the roles. Trisha looked ultra glam in her role, while Kriti looked traditional. Trisha complemented Pawan and together they made a good pair. Paresh Rawal, Mukesh Rishi and Sonu Sood did not have much to do in the film.

Mani Sharmaa's music and background score enhance the movie. Vincent captures the picturesque locales well on his camera. The retro portions too have a 'period' feel to it.

Teenmaar is entertaining despite its slow pace in parts. It's Pawan's show all the way mostly. 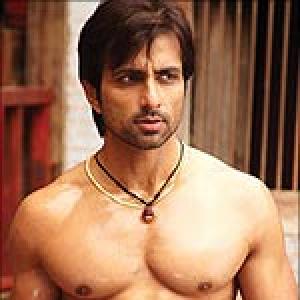 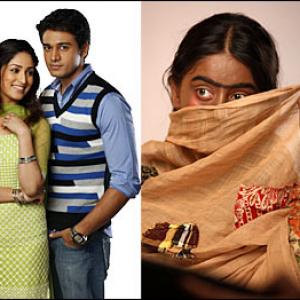