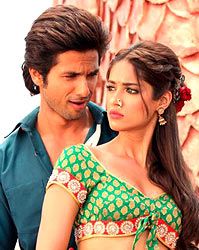 Films coming from the house of the Tauranis have repeatedly boasted of good music. We saw this with Race 2 and Ramaiya Vastaviaya.

Mika Singh begins the proceedings with the unconventional Tu Mere Agal Bagal Hai. Though it tries to bring in the sound of the 1970s, an overdose of background voices and instruments results in a bhel puri of sorts. One needs to develop a taste for it.

Singer Atif Aslam, a regular with the Tauranis, comes up next with Main Rang Sharbaton Ka and he doesn't disappoint.

One does take a while before getting a 'taste' of the proceedings, pun intended, but soon after it is the simplicity of the tune (and the way it is sung) that hooks you on.

Chinmayi Sripaada, who had done well with Titli (Chennai Express) a few weeks back, is the female singer alongside Atif and she does well this time around too.

Later, it is Arijit Singh, the Aashiqui 2 sensation, picking up the mantle as a sole singer for the 'reprise version' and is good.

With Shahid in there, it is tough not to expect a party number in the album. Hence, it is rather surprising to hear Hey Mr DJ making a belated appearance in Phata Poster Nikhla Hero. Benny Dayal, who has always delivered whenever given an opportunity, does well here too while Pritam shows his expertise in creating the kind of sound that indeed goes well with the clubs and dance floors.

Moreover, with new and contemporary singers Shefali Alvaris and Shalmili Kholgade stepping in as well, Hey Mr DJ turns out to be the number which could well have been a flagship affair for the film.

It is time to get into the sombre mood though with Rahat Fateh Ali Khan coming on the scene with Mera Bina Tu. First, he comes along with Harshdeep for this sad number which is Indian in its core though presented along with Western arrangements. A filler track that doesn't really go all the way in turning out to be a stand out track in the album, Mera Bina Tu later arrives in its solo version as well which again has Rahat Fateh Ali Khan at the helm of affairs. A song about the protagonist wishing good luck to his lady love as he walks away from her life, this is core situational.

Next to arrive is item number Dhating Naach, featuring Nargis Fakhri. On the same lines as Dekha Tu Tujhe Yaar Dil Mein Baji Guitar (Apna Sapna Money Money), which stays on to be one of the biggest dance numbers created by Pritam, this one also boasts of some good fast paced beats. Led by Neha Kakkad with Nakash Aziz and Shefali Alvares joining in, it has a huge chorus element to it and ensures some good entertaining moments when it plays on screen.

Last to arrive is Janam Janam, which is an ode to the mother and plays as many as three times in the album. While Atif Aslam sings a happy and the sad version of the song, it is Sunidhi Chauhan, who gets a solo of her own too. A situational number which does come easy on ears but doesn't quite promise a standalone chartbuster in the making, one wonders if this one really required such extensive placement in the album.