News
Business
Movies
Sports
Cricket
Get Ahead
Money Tips
Shopping
Sign in  |  Create a Rediffmail account
Rediff.com  » Movies » A story that needed to be told 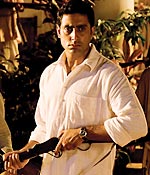 My favourite moment in Ashutosh Gowariker's new film comes when a bunch of schoolchildren are lying in an open field, exhausted, limbs heaped atop one-another's, looking up at the clouds and trying to assimilate the patriotism they've just been injected with.

One wonders what Vande Mataram means, and -- even as a few profess ignorance and one finally reveals that it is a salutation to the motherland -- a chubby youth smiles and comments, simply, that 'it feels good to say it, doesn't it?" and repeats the battle-cry, finding adulthood, hero worship and camaraderie all at once.

I confess that despite my last name, I wasn't very aware of the Chittagong uprising in a corner of Bengal, in which freedom fighter Surjya Sen and his companions led over fifty teen boys in violent, elaborately-planned anarchist revolt and struck an impressive, Empire-halting blow for the motherland. It is a critical incident, one ignored by centralised History syllabi and a story that definitely deserves telling -- and for this, Mr Gowariker, do take a bow.

That appreciation aside, Khelein Hum Jee Jaan Sey is a clumsily structured, unevenly paced film, with very few moments to match up to the aforementioned scene. The first half unfolds like a school play -- all stilted dialogue-delivery, self-aggrandising smug smiles ('look Ma! I'm playing a freedom fighter!'), and white kurtas borrowed from a Rin commercial -- and, quite frankly, like any school staging which doesn't feature a relative on-stage, the film lulls you to perplexed sleep.

There is period detailing, sure, with square-edge'd badminton rackets, vintage cars and picturesque calendars telling us that January is ticking away, but between the wooden dialogue and the unspectacular acting, this is simply a school play with a good art teacher in charge.

It is the second half of the film that then hits you straight in the solar plexus, because after that soporific opening, here we have wall-to-wall action. The Chittagong Uprising makes for a smashing narrative, and Gowariker plays it loyally enough. It isn't subtle and the direction is straight out of the Jingoism Manual, but because the story itself has such immense meat, it's hard to not get sucked in as you watch it unfold.

The film's own soundtrack is an ineffective one, but by the time the end rolls around, Gowariker falls back on Vande Mataram and it unfailingly gets the job done. It is still a school play, but a school play with a big enough budget to show lots of action setpieces, and I daresay we'd all be okay with that.

Surjya Sen's fundamental masterstroke, that of using teenagers, is a scandalous choice, and one that can rightfully kick off, as the nation seems fond of saying this week, 'a larger ethical debate.' Is it right for a schoolteacher to incite young minds and involve minors in a revolution? He fought for freedom, but who draws that line for an easily-impassioned child? Is it okay to put them fatally in the line of fire just because the children themselves agree? And who decides how old is old enough? These are loaded questions and one doesn't expect this film to answer them, but a film on the subject needs to explore the children's psyche, see what is going through their mind. They are the story, and this film cruelly sidesteps their innards. In the second half, as the young revolutionaries are scurrying for cover and shuffling into position, they respond to military commands just like their adversaries. 'Company, fall in line' has the same effect on the kids as it does their bulldog-moustached British adversaries, and it would have had a far greater effect on us if we'd have seen the senior anarchists teach their teenaged charges these, seeing them make the decision to follow the opposition's process to match them. Instead, we are treated to repeated scenes of boys lifting barbells.

The boys themselves aren't bad, though there aren't any standout performers. Among the revolutionaries leading the charge is Ganesh Ghosh, played by Samrat, a stout-necked slab of muscle who, in the film's finest performance, brings both credibility and craft to the table. Vishakha Singh does very well as Pritilata Waddedar, the film's heroine who handles not just romance and loss, but also defiant martyrdom. It was also most refreshing to see Rishi Sethi pop up for a scene, the veteran bit-actor -- and Prakash Mehra's onetime assistant -- who hung around so many Bachchan-Mehra films, from Zanjeer to Namak Halaal to Kaalia.

Abhishek Bachchan, however, is woefully miscast in the film's leading role. Content to oscillate between a 'thoughtful' furrowed-brow look and a creepy smile in the first half, the second sees him scurrying for instruction from his colleagues and hardly ever assuming control. This is not an inspiring leader of men or boys -- like Aamir Khan in Lagaan or Rang De Basanti, or Ajay Devgn in The Legend Of Bhagat Singh -- but instead just another one of the lot.

Shreyas Pandit as the bespectacled but unflinching Ambikada, Samrat's Ganesh or even Maninder's Anant Singh... all have take-charge moments better than the hero, and history suggests Surjya deserved better. It is also rather disconcerting to see the actor unable to say Bengali names with the right inflection, his climactic struggles with the name Kolpona ('Call-punna', he wheezes) especially laughable. His Bengali mother must be mortified. Abhishek might have the most loaded last name in Hindi cinema, but clearly it takes more than that to pull off a Sen. 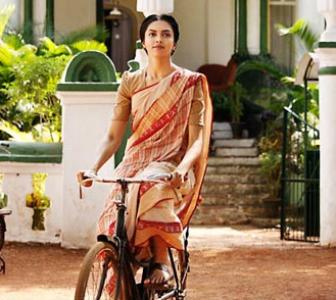 Deepika: Acting is not about how much make-up... 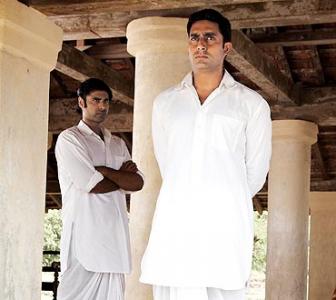 Who wore a dhoti best? Vote! 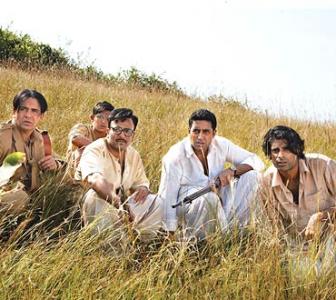 When Hindi films fought for freedom 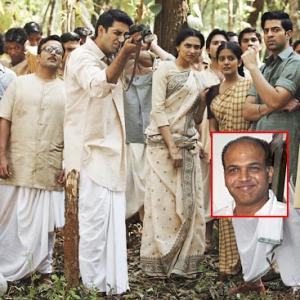 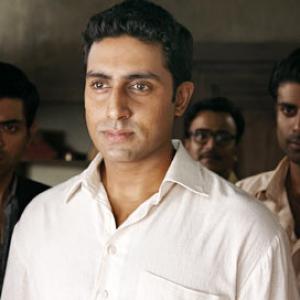