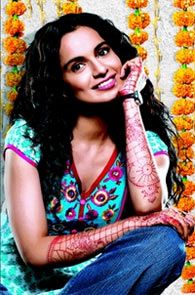 Kangna Ranaut is gobstoppingly spectacular. The actress has always flirted with the unfamiliar but here -- at her most real, at her most gorgeously guileless -- she absolutely shines and the film stands back and lets her rule, says Raja Sen after watching Queen.

This is a story of girl meets girl.

The girl, a pink-sweatered doll showered with sticky compliments by her mithaiwallah parents, is all set to be married. She wishes she could learn the dance steps from Cocktail her grandmothers are practicing, and that her best friend showed up in time for the best sangeet-selfies. She doesn’t get married. Instead, after a lifetime of making the most of what is dealt to her, she goes away and finds a version of herself she never knew existed.

This is a story of girl meets girl, and you should know upfront that this is not a love story.

Unless, of course, we refer to the relationship between the audience and the protagonist. Because I dare you to watch Queen and not fall in love with the character.

Vikas Bahl’s film starts off looking like yet another entry to the increasingly cluttered Delhi-Shaadi subgenre, but it is clear soon enough that this is a film etched more acutely than most. A crying girl grabs a laddoo because it’s nearby, college girls wolf down golgappas on credit, and, after a fiancee gets dumped in a coffee shop, her former man dusts the table free of the mehndi flakes that fell there when her desperate hands chafed helplessly around her cellphone. Relationship detritus comes in the oddest of shapes.

What happens in this film isn’t as important as the way it does. The plot is a mishmash of Meg Ryan’s French Kiss and Sridevi’s English Vinglish, but Bahl’s treatment is fresher and more vibrant, and -- incredible as this may sound -- his leading lady is better.

Kangana Ranaut is gobstoppingly spectacular. The actress has always flirted with the unfamiliar but here -- at her most real, at her most gorgeously guileless -- she absolutely shines and the film stands back and lets her rule. There are many natural actresses in Hindi cinema today, but what Ranaut does here, the way she captures both the squeals and the silences of the character, is very special indeed. Her character is built to be endearing and Ranaut, while playing her Rani with wide-eyed candour, is ever sweet but never cloying. It’s a bold but immaculately measured performance, internalised and powerful while simultaneously as overt as it needs to be to moisten every eye in the house.

Having a name that literally means royalty, a name that feels more like a monarchist suffix than a name, can make for awkward conversation when one is forced to explain it to those from farflung shores, and Rani does better than I ever did, enchanting Frenchmen and Italians and Japanese with an irresistibly proud “Queen!”

chirrup. The girl goes to Paris and Amsterdam and has many an adventure, and even as Rani steps out to discover her own character, Ranaut stays firmly and impressively in character. In a bar with a waitress ready to pour a spigot of booze down her throat, for example, Rani opens her mouth more out of an obedient instinct than a willingness to drink.

And so this girl from Delhi’s Rajouri Garden traipses around the world, Skyping with her family upto ten times a day, and yet finding liberation around every corner. The cast is mostly excellent — most notably Rani’s family, particularly her grandmother and kid brother/chaperone, and her best friend from college who laments her own shitty life — and Rajkummar Rao is perfectly cringeworthy as a wannabe who believes a London trip makes him better than those around him.

This is a massively entertaining film, even though it does run too long, and Rani’s fun travails are bogged down by a sense of tokenism, by her friends being White, Black and Asian (and the Asian being one of the most annoying Japanese caricatures since Mr Yunioshi from Breakfast At Tiffany’s). The unbelievably hot Lisa Haydon — with Mick Jagger’s tongue tattooed on her thigh — drapes her legs around everything in a seemingly relentless quest for stripper-poles, and her accent is atrociously inconsistent, but ah well. This isn’t about her. Everyone in this film is playing a supporting role, even the director. When nothing else works in the shot, you can turn unfailingly to Rani, besotted, and smile at her with an affection you saved for your teenage crushes. She’s a wonder.

Kudos, then, to screenwriters Parveez Shaikh, Chaitally Parmar and Bahl, but those applauding the great writing shouldn’t forget Ranaut herself, credited for Additional Dialogue. She made Rani and much as Rani’s making her, and for that we must tip our hats.

Ranaut always seemed like a misfit in mainstream Hindi cinema, a stunning but strange creature who belonged to a different jigsaw, but now our movies are beginning to catch up with her. Queen is a good entertainer, sure, but, more critically, it is a showcase for an actress poised to reign. This is one of those monumental moments when you feel the movies shift, and nothing remains the same. I've seen the future, baby, and it's Kangana. 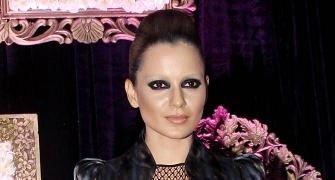 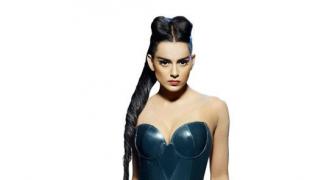 The BEST Movies of Kangna Ranaut 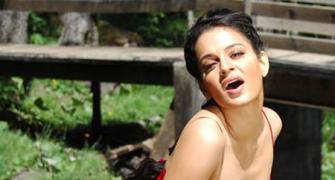 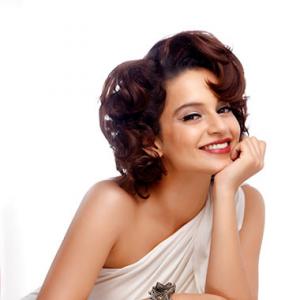 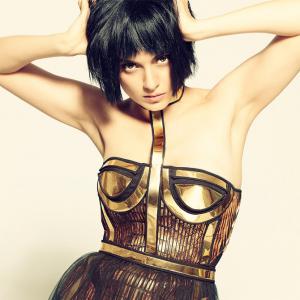 Kangna Ranaut: I think I am sexy