RD: The man who touched our souls 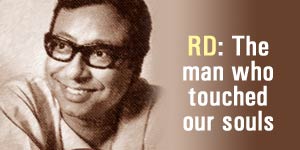 Rahul Dev Burman made a lasting impression in most of our lives with his music.

As we celebrate this music composer's life, we asked readers to

write in to us, listing 25 of their favourite RD Burman songs.

not only lists his top 25, he also talks about the infuence Pancham had on his life.

A decade ago, I was preparing for a medical entrance exam. On January 4, I left my home to attend my classes after a tiresome one-and-half-hour journey. While chatting with my friends in class, someone said, 'It's sad to hear about the death.'

When I asked who died, I was shocked. It was my favourite music director R D Burman. I was completely out of mind. All of a sudden, everything felt silent. I could not stay in class so I left immediately. I went to Lake Hussain Sagar and sat for an hour, dejected.

Most of the Rajesh Khanna and Amitabh Bachchan hit numbers come from the RDB-Kishore Kumar combination. Filmmakers like Nasir Hussain, Ramesh Sippy and Gulzar preferred RDB as their music director, with a winning combination of either Majrooh Sultanpuri or Anand Bakshi as lyricists.

Here are my favourite numbers:

(Amar Prem): Whenever my friends and I have a party, this song is a must. Anand Bakshi and RDB at their best.

Chura liya (Yaadon Ki Baaraat): Each and every remix album today has this song.

Aapke aankhon mein kuch (Ghar): Even today, you can feel the freshness of RDB's music through this song.

Aanewaala pal (Golmaal): This comedy had melodious songs, which really get you involved in the film.

Ek chathur naar (Padosan): Who can forget this song? It's the greatest funny song composed. Reach out for Kishore Kumar and Manna De, interspersed with Mehmood's Tamil dialect.

Tere bina zindagi (Aandhi): All the songs of this film are great hits from the winning combination of lyricist Gulzar and RDB.

Do ghoont mujhe bhi pilade (Jheel Ke Uss Paar): You cannot find another song like this from Lata Mangeshkar. It's a rare gem from RDB.

Tumse milke aisa laga (Parinda): One of the most melodious compositions from RDB

Kisska Rastha dekhen (Joshila): This sad song has so much pain in Kishore Kumar's voice.

Kehdoon tumhe (Deewar): Although the film has a few songs, you can picturise this song on Shashi Kapoor and Neetu Singh. It's a superb number in a serious film, which gives us a break from the strong family drama.