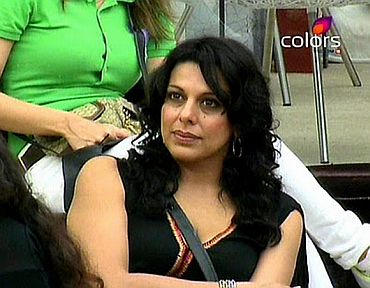 Actress-model-TV host Pooja Bedi was on Saturday evicted from the Bigg Boss house.

Bedi, daughter of actor Kabir Bedi and dancer Protima Bedi, was the oldest contestant in the reality show.

During her 55-day stay in the house, she was not involved in any major arguments with her fellow contestants.

Bedi, who has two children with ex-husband Farhan Ebrahim, was seen getting intimate with fellow contestant Akashdeep Saigal (Sky) on the show but she maintained that they were just friends.

"Sky is an amazing human being. I am shocked to know that he has been portrayed as the villain of the show but that is not the reality. He has a wild temper but who doesn't have it. He is a very sensitive and kind guy. He is the sort of person I want to be friends with," she said after her eviction.

The Colors TV show is the Indian version of international reality show 'Big Brother' and is co-hosted by Salman Khan and Sanjay Dutt.