News
Business
Movies
Sports
Cricket
Get Ahead
Money Tips
Shopping
Sign in  |  Create a Rediffmail account
Rediff.com  » Movies » Michelle Pfeiffer is back with a bang

Michelle Pfeiffer is back with a bang 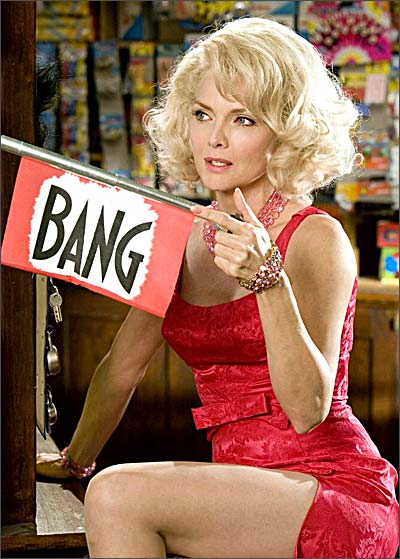 The gorgeous actress, best remembered for her Academy Award nominated performances in Dangerous Liasons, Love Field and The Fabulous Baker Boys -- not to mention filling out a catsuit superbly in Batman Returns -- hasn't been on screen in some time.

Her last release, in fact, was way back in 2003, when she voiced the villainous Eris in the animated Sinbad feature, also featuring Brad Pitt. I Am Sam and What Lies Beneath were way back in 2001 and 2000 respectively, and it's a criminally long time for someone as lovely and talented to stay away from the arclights.

Fret no more, boys. The fabulous actress is back, with a super-talented ensemble cast in Hairspray, scheduled to release in July.

1988's Hairspray, directed by John Waters and starring Sonny Bono and Debbie Harry, was a smash hit, spawning the musical the new film, directed by Adam Shankman, is based on.

For now, all we can do is wait for Michelle. Gladly.