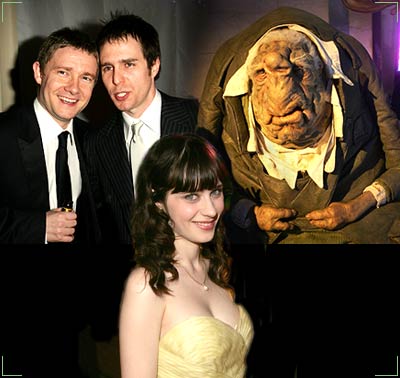 As Hollywood continues to adapt everything into a movie, celluloid blasphemy gets increasingly painful.

On Wednesday night, Disney premiered its latest release, The Hitchhiker's Guide To The Galaxy, in London.

At the aftershow party in London's Freemason's Hall, the spotlight focused on the Vogon costume (seen right in the photograph), even as the actors wandered about happily, trying to gauge reactions on the film.

Hitchhiker's Guide, an adaptaion of the Douglas Adams classic, is directed by Garth Jennings, and stars Martin Freeman as Arthur Dent (far left) with Sam Rockwell as Zaphod Beeblebrox (centre). Zooey Deschanel (below) features as the female lead, Trillian, and Stephen Fry provides the voice of the book. Bill Nighy, Alan Rickman and John Malkovich also feature in the film.

Hitchhiker's Guide releases in the US on April 29.