News
Business
Movies
Sports
Cricket
Get Ahead
Money Tips
Shopping
Sign in  |  Create a Rediffmail account
Rediff.com  » Movies » 'I am not worried of failures'

'I am not worried of failures'

At a time when every other hero wants to borrow stories from other languages, Shivraj, who is readying to go abroad to shoot the songs for his next release Thaayiya Madilu, has decided not to act in remakes.

In conversation with R G Vijayasarathy, Shivaraj speaks about his forthcoming films, the crisis in the industry and his personal life. Excerpts:

There is a feeling that the crisis in the Kannada film industry is due to the ego clashes between some of the producers and the man who is heading the cine workers organisation. Launches of new films have been stopped for the last three months. Has anyone done anything to resolve the crisis?

I wont go into the background of the issue or comment on the perceptions of the present crisis.  I have spoken to many people, including some top producers, and all of them want the crisis has to be resolved fast.

All of us -- Vishnu Sir (Vishnuvardhan), Ravichandran, my brother Raghavendra Raj Kumar, Darshan and Sudeep -- are working to get this resolved. I think we should have concern for the workers who have lost their jobs. The problems of producers also should be addressed.  I don't think the crisis can continue much longer.

2006 has been a bad year for the Kannada film industry.  Even you had a disappointing year, as the much-hyped Gandugali Kumara Rama did badly at the box office. Two other films of yours also did just average business. Are you worried?

I have always felt that success and failure are part of the industry, as they are two sides of the same coin.  There is no fixed formula for success in the industry. All of us are trying to hit the bull's eye, but the success of a film is determined by people and not us. What can we do if our efforts fail to appeal to the people for whom the films are made?

I am not worried of failures, nor am I elated by success. I have seen enough of successes and failures in my film career spanning two decades.

Thaayiya Madilu is set to release on the eve of the Sankranthi festival. What is your take on this film?

It will be a very good effort. I have worked with S Narayan earlier in Galaate Aliyandiru, which was certainly one of the big hits of my career. The film's title may mean many things to the audience. People may think it is either a high emotional drama or a tear jerker, but they will know that it is neither when they see it.

I will not go into the details of the story, but would like to add that Narayan has taken extra care to write the script.

Your role in your next film Santha looks quite similar to the one you have done in films like Jogi and Om. Are you now returning to 'swords and sickles' to find success?

I won't agree with your perception. I had a three-month hiatus after my father's death. Since I had shaven my head, I had to wait for the hair to grow back. I am not interested in wearing wigs. So, many of my producers had to postpone their films. You should know that Thaayiya Madilu was started later but is releasing before Santha. I will not accept any project that resembles Jogi or Om.  You should know my next films Gandana Mane and Bandhu Balaga deal with sentimental subjects. 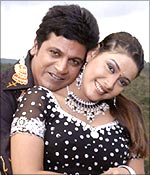 You have always given breaks to young directors. Raghava Loki is making his debut as the director in Sathya in Love, your new film to be launched next month.

I feel youngsters have fresh ideas and they have the urge to achieve something. It may well be a cliché if I say Sathya in Love is a different film, but  it really is.

You had said earlier told that you would be directing a film in 2007. Have you worked on the story?

I did have an idea to direct a film earlier, but as I have lot of professional commitments, I may not take up direction as of now. Appaaji's death and the present crisis have increased the work load. I have a lot of projects in my mind, but I will definitely turn to direction by late 2007 or early 2008; that is for sure.