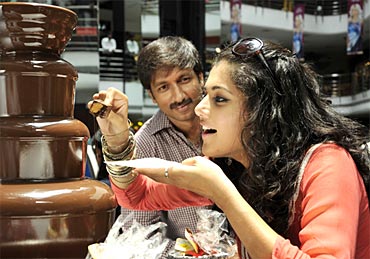 Director Krishnavamsi is known for his entertainers laced with a message. After the debacle of Mahatma (Srikkanth's 100th film) Krishnavamsi is back with a family-oriented subject, which is his strong point.

The film is all about how a man truly becomes mogudu (husband) when he understands his wife and wins her love. The story is set in a large family and there are twists and turns in the plot and enough emotion to satisfy any audience.

The film has about eight songs and the music is composed by newcomer Babu Shankar who is from the advertising field. Cinematographer Srikanth is also making his debut with this film. Mogudu is likely to release in October.
Radhika Rajamani in Hyderabad
Related News: Krishnavamsi, Ahuti Prasad, Cinematographer Srikanth, Shraddha Das, Babu Shankar
SHARE THIS STORYCOMMENT
Print this article 'What do politicians know about nuke safeguards?'