News
Business
Movies
Sports
Cricket
Get Ahead
Money Tips
Shopping
Sign in  |  Create a Rediffmail account
Rediff.com  » Movies » 'I am far too educated for my own good' 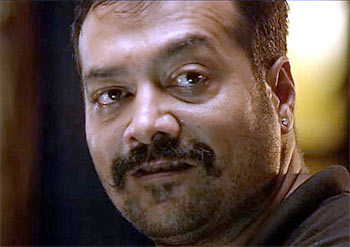 'That happens every time something goes wrong.'

'As a director, I am happy to take the blame because that's mine but I get blamed for everything.'

Anurag Kashyap was up all night after his film Akira hit the screens.

The Gangs of Wasseypur director was flooded with so many complimentary messages that he stayed awake till 5:30 am!

But he chose not to read the messages.

"I don’t read them because I get too conscious," he reveals.

In fact, he doesn't even read and watch his interviews because he doesn't want to alter the way he is and become conscious about what he has to say.

Anurag claims he just followed the script for his negative role in Akira.

"When I am an actor, I want to be the actor that I want on my set, who believes and trusts the director," he says.

He admits that he finds it strange to watch and hear himself as an actor.

"I was like ‘I have such a deep voice’. Had I known this before, I could have gone on so many dates," he says with a laugh. "You don’t realise this about yourself, everything seems fake."

While Anurag doesn't plan to act anytime soon, he has a lot going on as a filmmaker. He tells Jahnavi Patel/ Rediff.com what's next on the cards, his Akira experience and the scars Bombay Velvet has left on him.

Your acting in Akira has got a lot of critical acclaim. Were you expecting such a response?

No, I was not. I am a director, I can’t watch myself in an interview, forget in a movie.

I look at myself and I wonder why would I want to cast myself anywhere.

It’s like you find your voice strange. You hear yourself talking and it feels so weird.

Has your daughter watched the film?

When I told her let’s go and watch the film, she first asked me if I would die in the film. I said, 'Maybe.'

She asked me for a definite answer and I said, 'Yes.'

She did not want to watch the film.

She feel the same thing as me. She finds it weird to see me act on screen.

Karan Johar had said that when a director debuts as an actor, it is more of a responsibility because people have already judged you as a director.

Yes, it is a responsibility.

That happens every time something goes wrong.

As a director, I am happy to take the blame because that's mine but I get blamed for everything. IMAGE: AR Murugadoss and Anurag Kashyap on the sets of Akira

How is AR Murugadoss as a director?

He is an amazing guy and an amazing story teller. He has so much clarity and conviction.

He is clear about catering to an audience. He says that I am not going to sit and make a film to please a person with an opinion of what he expects.

In an interview, he said that he likes to make films with a realistic backdrop but a commercial element.

Regional cinema is more rooted in India than Hindi cinema.

The people, who are rooted, have their way of story telling, which is also rooted. That's why a lot of South Indian filmmakers work well in Hindi. Their cinema is rooted in middle class and rural. They understand the masses well because they have come from there.

So they will always be successful.

My audience is very niche. I am far too educated for my own good.

I find it very difficult to simplify it which he (AR Murugadoss) does easily.

With my movies, I feel what more can I do to make the audience understand but still, they don’t understand.

With Raman Raghav 2.0, I tried to make the audience understand everything -- there were long scenes, many dialogues, Nawazuddin Siddiqui sits and gives a speech but still, people did not understand.

Do you think audiences have become more accepting to different kinds of cinema?

There are all kinds of audiences. Eventually, I also have an audience.

It’s just unfortunate that my audience is a Torrents audience. (laughs)

As a director, you're known for making unconventional films. Was it a conscious decision to do commercial films as an actor?

No, I have no ambition as an actor. You saw what I did in Happy New Year.

So how did acting happen?

Sometimes it’s an emotional reason, sometimes some other reason.

She fed us biryani for three Eids and said now at least do the roles, so we did it. What was the reason this time?

This time it was Murugadoss’ conviction. I was saying no for a long time but when I met him, I saw his conviction and so I said I'll do it.

Will you direct yourself in a film directed by you?

In my film, never. How can I direct myself? I am not Manoj Kumar.

If I need money, I will act and earn but I don’t think I can direct myself.

What’s next on cards for you?

Nothing, I have just been writing. Next, I want a holiday.

There were reports about you directing a horror film...

I have written a horror film and other stuff. There are at least seven stories. But I don’t know what I will start first.

I want to first finish writing. The year 2016 is dedicated to writing and development.

Till we don’t work on all the scripts, we won’t get into production. When you remake a cult classic, does it get difficult?

I have no idea about that because the film is still being written and I haven’t read it.

I am not writing it. Two writers, who are huge fans of the original, are writing it. From what they have made me hear, it looked fun.

What’s your take on the Ae Dil Hai Mushkil, Shivaay and KRK controversy?

It’s a created thing. The media talks about it, people talk about it so everybody feels compelled to talk about it.

Ajay Devgn tweeted an audio and that's why it was covered by the media.

I don’t think that way.

My life has become much easier ever since I stopped reading newspapers.

When Bombay Velvet released, there was a terrorist attack on my film! That's why I had to read about it. I didn’t understand what had happened. I will watch what I want to watch, what I don’t like I won’t watch it.

The great critics across the world write long reviews (for good films) and when they don’t like a film, they write a five-line review and leave it.

But in India, if they don’t like a film, they will passionately write a long review.

If you don’t like a film, be indifferent to it and ignore it.

The whole business has become about negative headlines. 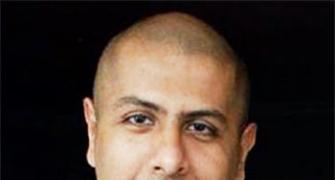 When Vishal Dadlani got it horribly wrong 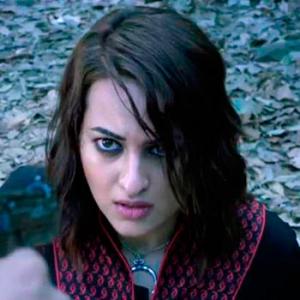