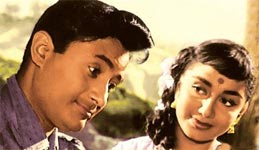 Some faces are made for the movies.

Dev Anand's nose, for example, forever consigned his visage to the silver screen. Features both smooth and uneven -- vivid eyebrows, soft eyes, the flaccid lower lip, rounded cheeks, that brash burst of hair -- all come together with unusual photogenic synchronicity, that nose playing the unerringly sharp anchor, to create a face made to be lit dramatically. Drown him in glaring light, blind him with contrast, throw him into soft focus: that face positively cries out for chiaroscuro.

Which is why, when friends rightfully lament the digital colourisation of classic films -- I feel they ought be restored instead to a beautiful black and white, a state of originally intended, never-quite-achieved gloss -- I'm more curious than damning.

I'd pick a Criterion-style resurrection any day minus the new palette, but if we are getting to see Hum Dono sharper and clearer than ever, if we are able to focus on the startle in Sadhana's eyes and the sign aboard the Officer's Mess, to... heck, if we can just see Devsa'ab in all his glory on the big screen, seeing him as unblemished as he's always been unabashed, then it's a bloody treat.

The colour itself, while meticulously done, is often surreal. Lipstick dazzles, skin seems slightly clay, and Dev Anand ends up wearing a lot of purple. Both he and the film, however, carry off bold colours brilliantly. It feels somewhat like watching the movie through a screen, and while hard to describe, I assure you that this is a delightful experience.

While credited to Navketan Films' publicist Amarjeet -- the apocryphal tale is that Dev magnanimously gifted him the credit and left it that way -- Hum Dono has Vijay Anand written all over it. The writing is tremendous, and the direction incredibly confident. And the film constantly confounds preset expectation. 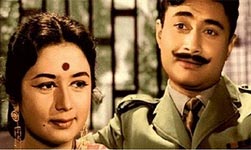 On the surface, it seems like a standard dramatic template. A young man called Anand is in love with Meeta, played by Sadhana. Her father insults him, and our hero, poor but proud, struts straight into the army. It is the time of WW2, and he's shipped off to Burma, where he meets a mustachioed clone who outranks him both in uniform and exuberance.

It is, in short, the kind of thing we've seen before and since, but the film does it all very differently indeed, with immense, striking flair. Even the inevitable moments of cliche -- the father's rant against his daughter's poor suitor, for example -- are immaculate, the words crafted with elegance and the scene shot in style.

And what style, indeed. The film opens with lovers in a wood, him annoyed at her lack of punctuality, and her making up for it by slipping a cigarette into his mouth and flicking it to life with a lighter she has bought for him. He smiles at the present, but says no more. Dev hasn't yet said a single word. She turns to leave and finds her sari tied to a cloth in his hand, and he finally opens his mouth, singing to her in Mohammad Rafi's voice. Abhi na jaao chhod ke, he implores, wanting more. Exquisite.

There is little point in dwelling on the plot of a fifty year vintage, and if you haven't watched it yet, you deserve to discover it at the theatres like I did last night. Suffice it to say that this is a emotionally fascinating drama that stubbornly refuses to have anything to do with filmmaking conventions.

At moments when lesser films would unquestionably have veered into high drama, Hum Dono stays amazingly casual. The film frequently eschews background score, giving itself over the words, the moments, the bullets and the glances. The silences are stunning, allowing the conversations to shine even better. Some other times, the music and visual treatment -- exaggerated contrasts, long tracking shots, progressive zooming into a close-up -- are presciently modern.

Anand, is a fine man but a fatally flawed hero. Emotionally inept, he represses feelings and hides them away from the world, posing behind the painful mask of a man too cool to care. He sees devastated people fall to pieces, and so extreme is his apathy that he doesn't realise when he crosses the line into cruelty. It is a tough character to bring alive, and Dev plays him beautifully, with an easy charm that shields his weakness from the audience. He's calm, mature, and level-headed -- except, in one extraordinarily audacious scene, his eyeballs talk to each other. Wow. 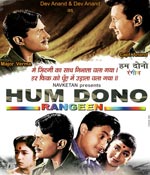 The trademark swagger is saved for the other Dev, the Major with the mad laugh. Gregarious and in love with cigars and his wife Ruma (Nanda), this Dev is a different beast. And the actor plays him very deftly, body language and facial expressions far removed from his clone. Vijay Anand, meanwhile, ensures that even letters they write have unmistakably distinct voices, even if we only hear them read out by their thrilled ladyloves.

Nanda is appropriately high-strung as the ailing wife, but it is Sadhana who walks away with the film. Her Mita is impossibly noble, a character too good to be true, and yet she makes it credible. Her eyes, expressive and captivating, do most of the work, while she balances out her submissiveness with a firm tongue. In one of the film's most powerful conversations, she lets Dev trample all over her while she intentionally gives him dual-edged answers, cutting into herself. It is a character impossible to resist when played this well: the eternal romantic, the one who never stops believing.

Then again, it can't be all that hard to be in love with Devsa'ab.

The women in Dev Anand's life Dev Anand: I will work till something happens to me