News
Business
Movies
Sports
Cricket
Get Ahead
Money Tips
Shopping
Sign in  |  Create a Rediffmail account
Rediff.com  » Movies » For Hrithik, it is a Preity night to remember

For Hrithik, it is a Preity night to remember

An award ceremony is a day when winners and losers come together to celebrate the magical medium of cinema. At the 49th Filmfare Manikchand Awards, Hrithik Roshan and Preity Zinta walked away with the Best Actor and Actress Awards for their roles in Koi... Mil Gaya and Kal Ho Naa Ho respectively. 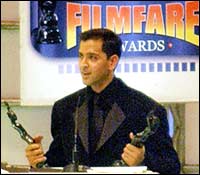 An ecstatic Farah Khan said, "I worked with Rakesh Roshan in two films [the other being Kaho Naa Pyaar Hai] and won two awards. If he needs someone for his next film, main hoon na." Main Hoon Na is the name of Farah's soon to be released directorial debut.

Shah Rukh Khan and Saif Ali Khan were unstoppable as they cheekily took digs at stars and films. After lightly spoofing Munnabhai MBBS and Koi Mil Gaya, by dressing up like Sanjay Dutt and the alien Jaadoo, the Khan reprised the deathbed scene of Kal Ho Naa Ho with not-so-subtle homosexual overtones.

Preity Zinta and Aamir Khan were hard targets of the Khan jodi's gag session. Saif joked that if Preity and Jaadoo (Koi Mil Gaya's alien) were to get married, on the wedding night, Jaadoo wouldn't be able to do it because he would need dhoop (sunlight) to perform. For the uninitiated, the film shows that Jaadoo derives all his power through the rays of the sun. Luckily for the Khans, Preity took it in good humour.

As for Aamir Khan, SRK remarked, "We can never be like you," and Saif cut in, "Yeah, we are taller." Wonder what The Rising star has to say. SRK mocked Saif, "Zabaan ko lagaan, mera matlab hai lagaam do [Mind your tongue]."

The award for Best Scene was presented by Sony Television honcho Kunal Dasgupta, to filmmakers Karan Johar and Nikhil Advani for Kal Ho Naa Ho. And filmmaker Yash Chopra gave away the first Lifetime Achievement Award of the evening to the legendary screen mothers, Nirupa Roy and Sulochana.

Politician Amar Singh and the singer trio of Alka Yagnik, Sonu Nigam and Sapna Mukherjee handed over the R D Burman Award to composer duo Vishal Shekhar for their work in Jhankaar Beats.

A rocking dance performance by Fardeen Khan was next on cards. Dressed in black and silver Fardeen danced to Janasheen's Nashe nashe.

Kal Ho Naa Ho won both the awards for Best Music (Shankar Ehsaan Loy) and Lyrics (Javed Akhtar). Interestingly, this is Javed Akhtar's 13th trophy. "Thirteen is not my unlucky number after all," he said.

Sporting a leather jacket and a French beard, Sanjay Dutt won the Best Actor in a Comic Role Award for his tapori doctor act in Munnabhai MBBS. Irrfan Khan bagged the trophy for Best Actor in a Negative Role for his performance in Haasil.

Queen of oomph Urmila Matondkar declared Bhoot hoon main in a shocking red glittery outfit in a terrific stage act. She later returned to collect the Critics' Award for Best Actress in Bhoot. Unlike other winners, she had only two words to say, "Thank you." Munnabhai MBBS won the Critics Award for Best Film.

The second Lifetime Achievement Award went to veteran filmmaker B R Chopra for his outstanding contribution to cinema.

The lifetime honour was followed by a surprise for Karisma Kapoor. The blue-eyed actress, who tied the knot last year to Delhi-based industrialist Sunjay Kapur, attended the function with her husband, mother-in-law, parents, aunts and Uncle Shammi Kapoor and his wife Neela Devi.

Kid sister Kareena dedicated her performance to Karisma by dancing to the latter's hit songs like Poocho zara (Raja Hindustani), Husn hai suhana (Coolie No 1) and Le gayi (Dil To Pagal Hai). She said, "Whatever I am today is because I am Karisma's baby sister."

Throughout Kareena's dance act, the camera shifted between an uncomfortable-looking Abhishek Bachchan (who was to be engaged to Karisma) to a dumbstruck Shahid Kapur (who is reportedly dating Kareena).

After an electrifying stage performance by Hrithik Roshan, Lara Dutta and Jaya Pradha gave away the trophy for Best Film to Rakesh Roshan for his sci-fi venture, Koi... Mil Gaya. Roshan Sr returned on stage once more to collect the Best Director trophy for KMG from Arjun Rampal and Esha Deol.

A gorgeous Rekha and Karan Johar announced Preity Zinta as Best Actress for her role as Naina Catherine Kapur in Kal Ho Naa Ho. And it was finally time for Hrithik Roshan for his moment in the sun as Best Actor, for his touching performance in Koi Mil Gaya.