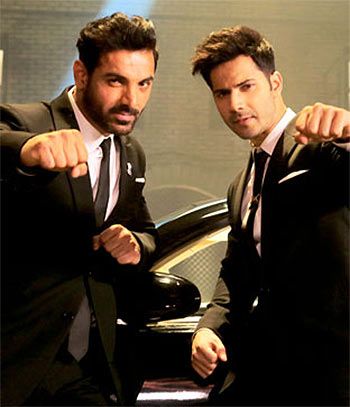 Once the flaky fizz vaporises into nonsense and noise, a sense of tedium begins to steep in. Even so, at its 124 minutes running time, Dishoom doesn’t hobble for too long to hurt one’s butt or brain, says Sukanya Verma.

Only replace the curious girl chasing The White Rabbit as a pair of chalk and cheese Special Task Force officers (John Abraham, Varun Dhawan) in Dubai looking for a missing Indian cricketer (Saqib Saleem modelled after Virat Kohli) at the behest of a minister (modelled after Sushma Swaraj).

Particularly the one with Akshay stands out; it’s a droll sequence, yes. What’s intriguing is the unusual space he discovers between fool and farce, razzmatazz and restraint. Too bad it’s only a cameo? Not really. Few stars can make the most of a cameo like this man.

Speaking of the Khiladi, Dishoom has the kind of 1990s set-up, where Akshay would pitch in as the deadpan, dour-faced superior to Saif Ali Khan’s funny subordinate and Raveena Tandon or Shilpa Shetty provide their brand of sass.

Only Varun Dhawan doesn’t get the same degree of support from his colleagues. John Abraham is expectedly stiff and stern.

Unfortunately, movies aren’t shirts and too much starch is never good. But the awfully translated English-to-Hindi one-liners he’s given here, takes the snubbing game to another level.

And my personal favourite: Sun

chacha, maine bahut saari chachiyon ko bewa kiya hai.
Meanwhile, Jacqueline -- good news -- doesn’t falter in the glamour department, and dances her legs off in the chorus-friendly Sau Tarah Ke. Bad news -- she still can’t act! There are scenes where if you aren’t paying attention, you won’t even realise she made a joke. Sadder, if you are, because you won’t realise it was a joke.

There’s Akshaye Khanna too, doing his bit as the hostile Queen of Hearts of this unintentional and distorted Alice account. It’s always wonderful to see the cucumber cool actor reminding Bollywood a thing or two about subtlety even when playing a woefully written villain as his in Dishoom. Neither his greed as an international bookie nor his narcissism are fully exploited as his character descends into its shriller, stupider conclusion.

Despite an utterly scatter-brained premise (rather because of it), the merriment lasts only because of Varun. With his work here, he joins the ranks of stars known to make inanity work on the strength of their breezy jocularity and accessible charm. It’s also why he’s dangerously close to getting stereotyped.

Impishness, nonetheless, has a shelf life and the makers of Dishoom soon reveal it’s all they have to offer.

Considering it’s named Dishoom and casts both its leading men as burly cops in pursuit of a demented overseas kidnapper, it’s not too much to expect some adrenalin-pumping thrills and daredevilry in director Rohit Dhawan’s second film, after Desi Boyz.

It’s not out of lack of opportunity though, which presents itself amply in craggy speedways and gun-totting cardboard terrorists ‘somewhere in the Middle East.’ Except the title is seldom justified in its disappointingly scarce and sloppy action.

Once the flaky fizz vaporises into nonsense and noise, a sense of tedium begins to steep in. Even so, at its 124 minutes running time, Dishoom doesn’t hobble for too long to hurt one’s butt or brain. 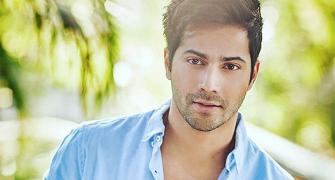 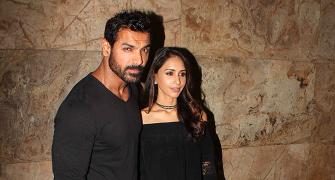 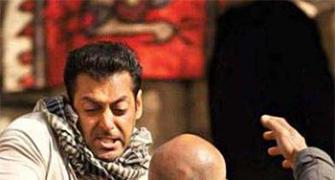 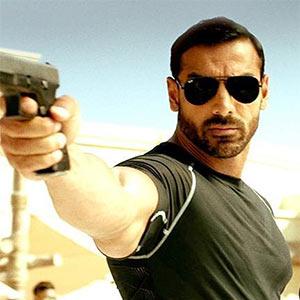 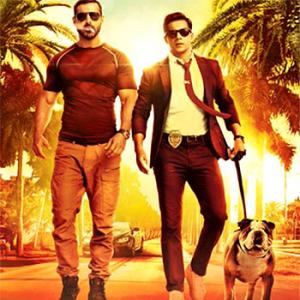