Making a film in India can never be easy," says director Wes Anderson whose newest film, The Darjeeling Limited, was shot mostly in Rajasthan. "Every little place in the country is so fascinating that you feel like making one film after another."

Darjeeling Limited opens the New York Film Festival on September 28, and focuses on three bickering brothers who go on a spiritual journey in India hoping to reconcile with each other.

Anderson, whose hit films include The Royal Tenenbaums, wanted to shoot the film in Darjeeling. "But I hardly saw the sun when I spent a few days there while working on the script," he chuckles. "By then, I had fallen in love with Rajasthan, and that is how we ended up with most of our work shot on a moving train through the state."

The 38-year-old director cast Owen Wilson, Oscar-winner Adrien Brody (The Pianist) and Jason Schwartzman (who also co-wrote the screenplay) as the brothers who have not spoken to each other in a year. Veteran actress Angelica Huston plays a small but pivotal role as the estranged mother of the three men.

London-based newcomer Amara Karan, who among other interesting encounters with the three brothers has a scorching kissing scene, is the steward on the train. And in a very brief appearance, Irrfan Khan appears as the grieving father whose son dies in a drowning accident.

Anderson says by putting the tense brothers, who are suspicious of each other, in a constantly fast moving India, he was able to create a kind of quiet drama he has never created before.

Eschewing the standard practice of shooting the interior scenes of a train on a sound stage in a studio, he opted to shoot them on a hired train. The train itself is one of the big 'characters' in the film. But India is an even bigger character, he says. 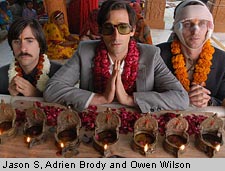 "India gets under your skin in no time," Anderson, who fell in love with India when he watched Jean Renoir's The River and practically every film of Satyajit Ray. "I have travelled widely and can't think of any other place that is filled with colours like India. Another amazing thing I found when I visited India by myself four years ago was how people look at you as if you are from another planet. This happens in smaller towns and villages. I feel I am an alien. But soon, I realise I can never be alone in India. Friendships are made in no time."

Owen Wilson plays Francis, the eldest of the three brothers in the film, and is a control freak. Wilson is a close friend of the filmmaker from their college days in Austin, Texas. The actor, who is recovering from a suicide attempt recently, is seen heavily bandaged throughout the film. It is suspected that he had tried to kill himself.

'Francis sees himself as one trying to keep the family together,' he says in the production notes. 'Because our father is dead, our mother is AWOL, Francis is literally damaged. And there is Jack (Schwartzman), coming out of a bad relationship. There is also Peter, who is having trouble with his wife. So Francis has united the brothers on this great spiritual adventure in India, and he has the funny idea they're going to have a spiritual journey -- whether they like it or not.'

But a lot of things go wrong till the three find sudden inspiration to alter their lives. 'For much of the film, the story reminded me of one of those family vacations you had growing up where everything would in a disaster,' Wilson muses.

The second brother Peter (Brodie) is intensely unhappy with his life for a number of reasons including the thought of becoming a father soon. And the youngest brother Jack is a writer who finds plenty of 'inspiration' in the crises in his own family. Like his siblings, he too has a mean streak in him. 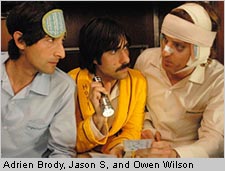 Despite visiting a number of temples and shrines, the brothers don't come any closer. But an unexpected incident lands them in the middle of the desert in a small village. Watching a tragedy unfold, and seeing the villagers addressing it with dignity, the brothers start another kind of journey. And this time, it looks like they may learn a few life lessons.

Anderson has said that he always wanted to do a film about three brothers because he is one of three brothers. 'We grew up fighting and yet, they are the closest people in the world to me,' he has said in an interview. 'Of course, all the characters in the movie are fictional.'

Anderson, who also got Schwartzman's cousin Roman Coppola to work on the script, talks about how they started plotting the story in the cafes in Paris, and went to India in 2006 to do more writing. They  travelled by train and went to dozens of temples looking for plot ideas.

"We did all the things in the movie -- acted the whole movie out together, the three of us," Anderson says though he hastens to add that they did not carry a dead child or buy a deadly snake, or have an affair on the train as shown in the film.

Coppola says Anderson would create a kind of yin and yang through out the shoot. On one hand everything was 'crisply choreographed and designed,' and yet he would stay open to the utterly spontaneous confusion, comedy and chaos. "In the middle of all this, there was always something beautiful," Coppola adds. "The whole spirit behind the movie was to put these difficult, enigmatic and strange characters on the train and then to move fast into chaos, to really roll with the punches, hoping a lot of unexpected happen."

Many of the film's scenes -- including a nerve wracking trip Bill Murray makes at the very beginning of the film in a cab to the train station -- were shot on the crowded streets.

Cinematographer Robert Yeoman, who has photographed all the five films Anderson has made, confesses immediately he has never been challenged more on any film as on The Darjeeling Limited.

'Shooting on the Indian streets is somewhat uncontrollable,' he says in the film's production notes, 'and the sight of a camera always draws huge crowds. Wes likes to carefully place each of his actors in the frame but we often had to deal with the spectators in the background.'

And how did they manage to work quickly? 'We worked often with no lights for day scenes,' he says. 'We also learned how to take the advantage of all this randomness. I hope the film got a particular energy by all the unpredictability.'