What's the da Vinci fuss about? 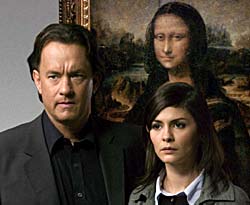 For the three or four among you who haven't heard of Dan Brown, his novel Da Vinci Code, or the controversy surrounding the film set to release in India this week, a quick primer.>

Who is Dan Brown?

A 42-year-old American author of 'fictional thrillers'. Born in New Hampshire, USA, he graduated with a double major in Spanish and English before deciding on a career in music. After a children's cassette titled SynthAnimals, a self-titled CD, and a second CD called Angels & Demons, he came across a Sidney Sheldon novel and decided he could do a better job.

His first novel was called Digital Fortress, and he also co-wrote a supposedly humorous book with his wife called 187 Men to Avoid: A Guide for the Romantically Frustrated Woman, under the pseudonym Danielle Brown.

Should Da Vinci Code be banned?

His first three novels sold fewer than 10,000 copies. It was the fourth, 2003's Da Vinci Code, that went to the top of the New York Times bestseller list in its first week. It is now one of the most popular books of all time, with 40 million copies sold worldwide so far. In 2005, Time magazine listed Brown among the 100 most influential people of the year.

What's the best-selling novel about?

It is a combination of detective-thriller-conspiracy fiction, the second part of a trilogy that began with Angels and Demons, introducing a character called Robert Langdon. In Da Vinci Code, Langdon, a famous Harvard symbologist, is summoned to the Louvre, the legendary museum in Paris, to examine a series of symbols relating to Leonardo da Vinci's art.

In decrypting the code, he uncovers the key to supposedly one of the greatest mysteries of all time. The plot involves a conspiracy by the church to cover up the 'true' story of Jesus.

Well, according to Brown, Jesus Christ married Mary Magdalene and had children by her. He makes claims about the historical origins of the Christian religion and its development.

Why is the Church upset?

The Vatican -- which governs the global Catholic community -- and the Anglican (Protestant) churches believe the novel distorts the Christian message. Christ never married and was childless when he was crucified. Also, the Catholic organisation Opus Dei says it has been portrayed as a secretive, violent group that stops at nothing to repress the truth about Christ.

Some Christians want to initiate legal action against both the film and the book, while others want a ban on the film, claiming it can confuse a lot of people about the validity of Brown's claims.

So, is everything the novel says 'true'?

Here's a clue: If it's labelled fiction, that's what it is.

But what about the controversy?

On his web site, Dan Brown says while the characters are obviously not real, '"the artwork, architecture, documents, and secret rituals depicted in this novel all exist.' He describes it all as 'real elements interpreted and debated by fictional characters.' The novel's 'Fact' page makes no statement about any ancient theories discussed by the characters though.

On what basis does Brown make these claims?

Going by his web site, and a number of interviews he has given, he makes these claims on the basis that there have been rumours of this conspiracy for centuries. He says art historians agree that da Vinci's paintings contain hidden levels of meaning. He adds that scholars believe the artist's work provides clues to a powerful secret.

And yes, Brown did discuss da Vinci's most famous works with 'an art historian' who helped him 'better understand the mystery behind their surprising anomalies.' Plus, there was that whole year of research that went into writing the novel.

Is the book any good?

In terms of quality of writing, it is mediocre. The twists and turns are amateurish, there are sweeping statements made without much thought, and the number of factual errors are simply embarrassing. Fans call it action-packed and thought-provoking but, then again, these are fans of pulp fiction.

As far as good thrillers go, there are a great many others writers who could beat Brown hands down. It is the right mix of exciting ingredients that works in his novel's favour, not the writing itself.

Want to buy the book?

What sort of errors does Brown make?

A thorough answer to that question could take a great many pages. Suffice to say that, while a lot of it simply fails to make sense in terms of practicality, there are mistakes ranging from poor research on subjects like Albinism, to errors about facts, historical dates and locations, metric mix-ups, errors with reference to art and literature, blunders about ancient languages, fictitious organisations and more.

Will the film be banned in India?

That's hard to say at this point. Director Ron Howard has turned down requests by the Opus Dei to add a disclaimer at the beginning of the film. 'Spy thrillers don't start off with disclaimers,' he says.