An adventure fable sourced from the vast collection of stories from popular children's magazine Chandamama would be out on big screen soon. The monthly has tied up with Thiruvanthapuram-based Toonz Animation Ltd to produce a full length animated feature film based on a story from the vast library of Chandamama on an estimated budget of Rs 20 lakh.

"We have entered into a deal with Chandamama where we will go through their entire library of over 15000 stories and select a suitable one to be made into an a 90-minute animated flick," says Divas Sadasivan of Toonz Animation. 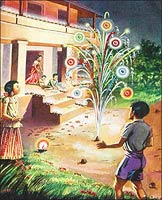 The move is part of the expansion plans of the children's monthly which has already ventured online with its website and runs a 4-hour radio programme broadcasting legendary stories from the magazine every Sunday on a private FM station in Chennai.

Soon the stories would be also made available on mobile phones too. "Creative teams from both companies would work jointly and select one story most probably bearing towards adventure which would be then scripted for the movie," J Subramanyam, CEO of Chandamama told PTI.

"The emphasis worldwide is on content that has local appeal. In animation most of the work has been on characters that are mythological. We wanted to do something different and since Chandamama is loved by children and adults alike we think this film would appeal to a wider audience and more people would be tempted to watch," says Sadasivan. Toonz, which has previously worked on fully animated films such as Hanuman Returns and a 2D animated television series The adventure of Tenali Raman says it now wants to move away from mythology. The company is a major provider of animation to top US and Europe producers and has created Dragon Lands, a direct DVD sold in the US market as well as released a live action film Mostly Ghostly in the same market.

While the details have yet to be worked out the process of sifting through over 15,000 stories that have been published by the magazine 14 languages, is expected to be finalised within the next six months.

"If the selected story has the potential to be made into a 3D animated movie it is possible that we may even look at some foreign or even leading Indian film directors to make the film," says Sadasivan.

Chandamma was conceptualised by legendary filmmakers B Nagi Reddi and his friend Chakrapani to familiarise post-Independence generation with Indian tradition, folklore, mythology and history in the form of stories.

Bringing out an animated film is part of the iconic magazine's effort to appeal to the today's youngsters and also tap its huge market potential.

"The mandate is to make Chandamama available over a large cross section of platforms ranging from online to print radio and mobile," says Subramanyam.

"There was a time when our company was not doing so well but that was due to internal problems. We have pulled back and witnessed a four fold increase in profits over the past one year alone. I am sure the film once made would help us reach out to the current and future generations of young people," he adds.