Ajay Devgn drops out of Power 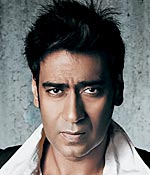 Ajay Devgn has dropped out of Rajkumar Santoshi's Power which starred himself with Amitabh Bachchan, Anil Kapoor and Sanjay Dutt.

The mahurat took place on a grand scale on Anant Chaturdashi in September this year but Ajay today announced that he is no longer a part of the project. "There were a lot of issues including date problems," Ajay told PTI.

He said he has committed to do an alternate film for producer Firoz Nadiadwala and director Rajkumar Santoshi, the makers of Power. Ajay said he had not shot for the film during the first schedule which took place in Mumbai in October.

When asked about him refusing Prakash Jha's Aarakshan, Ajay said, "I had not signed it. When Prakash spoke to me about his project on reservations, he was still in the process of scripting." The actor is currently busy promoting his upcoming home production Toonpur Ka Superhero which releases on December 24. He said his next home production would be a film with Abhishek Bachchan which is tentatively titled Bol Bachchan and will be directed by Rohit Shetty