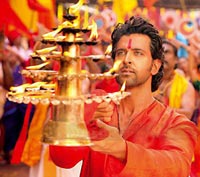 A look at the first-day box office collections of Agneepath.

In the race of box office supremacy, it seems Hrithik Roshan has raced ahead of the Khans and emerged winner.

His Agneepath, which released on Republic Day, has managed to rake in Rs 25 crores at the box office on the opening day.

According to initial reports, it is safe to conclude that Agneepath has succeeded in beating Bodyguard's first-day collections, which had been unbeaten since it released.

While trade pundits had predicted that the film would enjoy terrific first-day collections, they did not expect the film to break records. One of the main reasons for this was the length of the film.

"The running time of the film is longer than Bodyguard and Ra.One, which automatically reduces the number of shows in theatres," Mhamunkar says.

Mhamunkar says, "The film has surpassed everyone's expectations in the northern territory, where it has received a superb response."

One of the things going for Agneepath is its stellar star cast of Hrithik Roshan, Sanjay Dutt, Rishi Kapoor, Priyanka Chopra, and even Katrina Kaif.

Mhamunkar says, "The film was promoted as Agneepath, rather than a Hrithik Roshan film. The promos were liked, and the Chikni Chameli song, picturised on Katrina Kaif, added to the hype. The film is backed by Karan Johar, which automatically increases the anticipation amongst the audience."

He adds, "This month, we have seen very few big releases. Players opened to a lukewarm response and people have been waiting for a masala film for a long time. Agneepath came at the right time."

Be it single screen or multiplexes, the advance booking for the film has been incredible. Sunil Punjabi, CEO of Cinemax India, said, "The film has received a tremendous opening. The film is running in 125 screens with five shows per screen on an average. We haven't seen a better opening for a film in the last one year!"

"In spite of being a working day today, the occupancy for the film on Friday is better than expected," says Punjabi, adding, "We expect a 100 per cent occupancy during the weekend. In fact, we already have a couple of block booking for early next week."

The cast, meanwhile, is ecstatic about the record numbers. 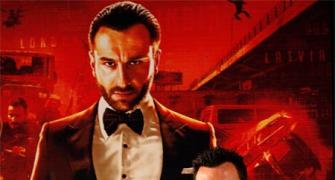 Saif: In reel or real life, Kareena pairs best with me 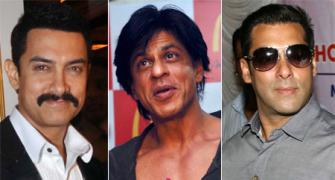 Which Khan will rule the 2012 box office? Mumbai Chawls, through the Bollywood lens