We want cricket, not cellphone commercials

It's a scary world in there,' Colin Hanks says in Untraceable, an undeniably interesting thriller I watched last night. An FBI sidekick to Diane Lane, he's talking about the Internet, equal parts playground to freaks and protector of freedom.

(Yup, I am still going to talk about cricket, and I promise you this isn't one of those blatantly fake sensationalist headlines that turns out to be utterly unrelated to the actual article. I'm going to bring up a proposition targeted at every hot-blooded cricket fan, but wait a few lines, won't you? Thanks.)

Back to Untraceable. The film has a great premise, about a serial killer who captures and tortures victims, streaming video live from a webcam and killing his victims based on how quickly visitors log on. 'The more people watch, the faster he dies,' explains a ticker at the ghastly site, while the chat window on the side fills up with alarmingly casual ROTFLs and LOLs. Talk about voyeurism being lethal.

For all its myriad globelinking benefits, the Internet can indeed be a frightening place. This is something director Uwe Boll is doubtless reeling from at the moment. Boll, who may someday reach Ed Wood like levels of notoriety and (perhaps) be revered as the worst filmmaker alive, is constantly reviled for his godawful disasterpieces, hackneyed video game adaptations that have spawned their own hate-groups across the Internet. 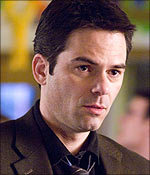 Now, cinema is a matter of opinion and Boll certainly thinks his work rocks. Even if he's all alone in doing so, his opinion is just as right as the rest of the world. Well, kinda. Alas, trying to drown out a million voices by snarling just isn't going to cut it. Now, yours truly knows a thing or two about being on the receiving end of online loathing, and I would never walk into a trap pitting myself against the dotcom janta, something Boll -- who usually resolves critical battles with boxing gloves -- foolishly did. When provoked about his 'worst director' status and online groups dedicated to Boll-hate, the director defiantly challenged his critics, saying that he'd quit filmmaking if a million people asked him to.

Within minutes of the interview's online publication, antifans had unleashed a petition to stop Boll from making movies, and the signature count in the first three days hit about 50,000. The movement began gathering steam in earnest, and suddenly the filmmaker was hitting back yet again in interviews, exhorting his fans -- a significantly outnumbered clan -- to start a Pro-Boll petition to counter the attack.

The result? 200,000 signatures and counting, with major influential film fansites linking to both petitions, while nudgingly laughing about Uwe's chances. And because there are more members in the Famous Five than in the Pro-Boll coalition, it's just a matter of time before Boll is asked, by an interviewer stifling his giggles, just when he's going to hand in his directorial baseball cap.

Of course, Boll might well not really quit cinema, no matter how many signatures. He could declare the petition rigged, manipulated, claim himself as the target of a smear campaign, or just, quite simply, have a change of heart.

It's all valid, not that it'll stop the giggles.

Now, to the cricket.

Primetime television has momentarily been taken over by the Indian Premier League, and my question to the Telecom Regulatory Authority Of India is whether there are any guidelines at all on cricket broadcasting? Or does a channel that has bought the rights automatically get to do any bloody thing it wants to?

Sure, cricket costs money, but does that give SET Max the right to cut off a game mid-over? In the turning point of the Sunday afternoon match between the Knight Riders and the Deccan Chargers, Andrew Symonds lost his cool at the umpire and began bowling with supreme waywardness. The scheduled sixth ball of the over was tossed, the umpire called it a no-ball but without cutting to Angry Andrew or even a jubilant Shah Rukh Khan, we are instead treated to, for the millionth time an hour, the sight of a dog fetching socks for a curly-haired youngling. What happened in the game? Oh, we'll find out next over, I guess.

ESPN-Star started the trend of using every single break between overs to push in a commercial or two, and we soon got used to that. Ten Sports and Sony worked the envelope even more aggressively, and began to routinely cut off commentators mid-sentence. And now this, where advertisements are repeated with such nauseating constancy they make you want to shoot an otherwise adorable pug, or attack any hair-dye buyer with a pair of shears. And we're not even going to the horrible production values the channel is flaunting for the best cricketing circus ever.

Is it too much to ask for some basic rules for TV channels? For ad-jingles to not eclipse the commentators voice when adverts randomly float across the bottom of the screen? For us to -- occasionally, at least -- get to see a near-realtime replay of a dismissal, or get to read who took the catch? Or just, simply, Thou Shalt Show Every Ball Of A Match.

Really, if that's asking for too much, we're soon going to come to a point where advertisers decide which overs are exciting enough to broadcast, and then a point when we're shown a flurry of commercials with a break for a boundary every now and then. Should we just be content with the bits of cricket we get to watch, even though every square inch of player clothing and every other second of commentary space has a brand name on it?

We need to take a stand, and raise our voices against this dreadful broadcasting. Dollars can't dictate democracy, and this highest-bidder crap just won't do. It's just a matter of time before any deep-pocketed XYZ buys their own TV channel, starts calling cricket something else altogether, and forces us to watch it. And we do, for want of anything else.

I'm not sure who exactly is in charge of assigning channel rights -- Lalit Modi, the TRAI, some random consortium mortals like you and I haven't heard of, or just decided via a whimsical chessgame between Vijay Mallya and SRK.

Either way, let's wake them all up. Here's the plan:

Let's take it to the streets, flood those inboxes, forward it to the world and beyond. Let's build up a helluva argument and make these complacent channels shape up. Let's not give up watching the game, but insist on seeing it the best way. Let's clean up their act and maybe even boycott the most over-exposed products on television. Let's get hundreds of thousands of signatures, and then storm the corporate citadel. Let's force them to hear our yell.

We want to watch our cricket. We want the world and we want it... now!

Hate this piece? Hate the way the IPL is broadcast even more? Or just want to drool over Diane Lane? Do write anything at all you want to me at senterfold@rediffmail.com.