News
Business
Movies
Sports
Cricket
Get Ahead
Money Tips
Shopping
Sign in  |  Create a Rediffmail account
Rediff.com  » Movies » No Sir! The Oscars weren't boring at all!

No Sir! The Oscars weren't boring at all!

'The way the winners react and the speeches they deliver.'
'That is where the fun happens, when the actors and other winners let down their guard, challenge the system, talk about issues that should matter to us,' says Aseem Chhabra. 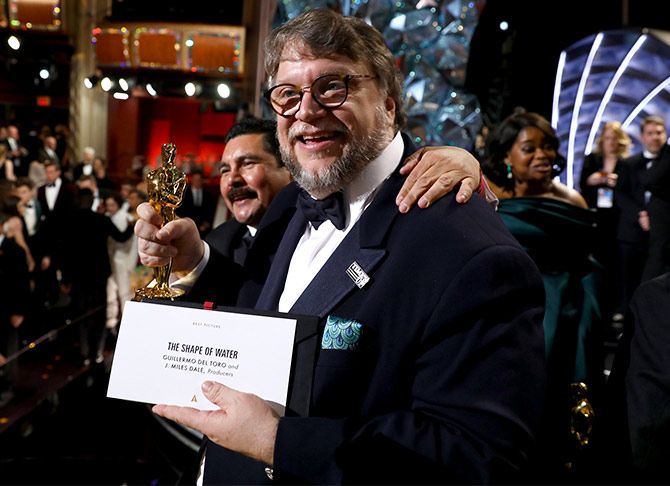 The 90th Academy Awards show went off as predicted. There were no major upsets or surprises.

All the big category winners had been predicted based on other industry award functions -- the guilds, and the critics' awards.

Some people may find that boring, as if each award is scripted and pre-planned. But having watched the Academy Award ceremonies since the early 1980s I can say that I like such Oscar shows, where my picks and my ballot win!

But there can be many other surprises -- mostly in the way the winners react and the speeches they deliver.

That is where the fun happens, when the actors and other winners let down their guard, challenge the system, talk about issues that should matter to us.

Two years ago there was the #OscarSoWhite backlash and that led the Academy to attempt to be more inclusive.

They added newer members to reflect the face of cinema around the world and to change the image of the 6,000-member committee that was mostly made up of older, white American men.

That revolution has not happened completely, but things sure look different.

IMAGE: Shashi Kapoor and Sridevi were honoured in the In Memoriam section.

Diversity was talked about and addressed in many speeches at the award ceremony.

The Shape of Water -- my favorite movie of the year, and a big Hollywood studio production -- won the two top awards -- Best Picture and Best Director.

The Shape of Water is the story of a mute woman who falls in love with a male sea creature. And her two close friends are an African-American lady colleague and a gay neighbour.

Despite the big Hollywood money behind it, The Shape of Water is the story of marginalised people, outsiders who feel left out until their final victory.

Meanwhile Get Out, a young upstart film-maker -- Jordan Peele's exploration of race relations in America -- got enough notice.

A satire and a horror film, Get Out was talked about a lot during the awards season. Some even suggested it could score the final upset by winning the Oscar for best picture. Get Out finally had to settle with the best original screenplay Oscar.

Greta Gerwig became the fifth woman to be nominated in the Best Director category. And although she did not win the Oscar (only one women -- Kathryn Bigelow -- has won in that category for The Hurt Locker), her nomination was celebrated today.

While introducing the nominees in the Best Director category, Emma Stone said: 'These four men -- and Greta Gerwig -- created their own masterpieces this year." The audience immediately applauded as Stone mentioned Gerwig's name.

Gerwig lost the Oscar to Mexico-born Guillermo Del Toro, who was earlier nominated for his original screenplay of Pan's Labyrinth (2006). At a time when President Donald J Trump keeps threatening to build a wall between Mexico and the US, Del Toro's win is remarkable.

This is the fourth time in the last five years that a Mexico-born film-maker has won the Best Director trophy. The other winners were Alfonso Cuarón (Gravity, 2014) and Alejandro Iñárritu (Birdman, 2015 and The Revenant, 2016).

And in 2013 Ang Lee, a Taiwanese American won the Best Director Oscar for Life of Pi.

There were other recognitions for Latin American cinema.

Coco, a Disney/Pixar production won the Oscar for Best Animated Feature Film. The heartwarming film that narrates Mexico's cultural history also deals with a singer who travels to the Land of the Dead to look for his great-great-grandfather who was a legendary singer.

'With Coco, we tried to take a step forward toward a world where all children can grow up seeing characters in movies that look and talk and live like they do, the film's director Lee Unkrich said in his acceptance speech.

'Marginalised people deserve to feel like they belong. Representation matters.'

Coco also won the Oscar for the best song.

Chile's A Fantastic Woman, a heartbreaking film about a transgender person wanting to mourn her lover's death, won the Best Foreign Language Film Oscar. Later, the film's star Daniela Vega introduced singer Sufjan Stevens's performance of the song Mystery of Love from Call Me By Your Name, making her the first openly transgender Oscars presenter. The critically acclaimed Call Me By Your Name only won one Oscar -- for its adapted screenplay written by the 89-year-old James Ivory.

Ivory, who started his career with English language films made in India (The Householder, 1963, followed by Shakespeare Wallah, 1965), paid tribute to his two collaborators, both of whom have passed away -- the German writer Ruth Jhabvala and the Indian producer (and also Ivory's life partner) Ismail Merchant.

Another collaborator of Ivory -- the late actor Shashi Kapoor was remembered in the In Memorial section, along with actress Sridevi who passed away last month.

There was one more South Asian face on stage.

Writer and actor Kumail Nanjiani became the first Pakistani American to present an award at the Oscar ceremony. Both he and his co-presenter -- Mexico-born and Kenya-raised actress Lupita Nyong'o (Oscar-winning Nyong'o started her career as an intern on Mira Nair's film The Namesake) addressed the so-called Dreamers who are in the US under the Deferred Action for Childhood Arrivals policy.

The Trump administration wants to end the policy, although it is currently protected by the US supreme court.

And Nanjiani added: 'And so, to all the dreamers out there, we stand with you.'

The Dreamers were also remembered during the performance of the Oscar-nominated song Stand Up For Something from the film Marshall.

In recent weeks Stand Up For Something has become an anthem for gun control activists in the US. 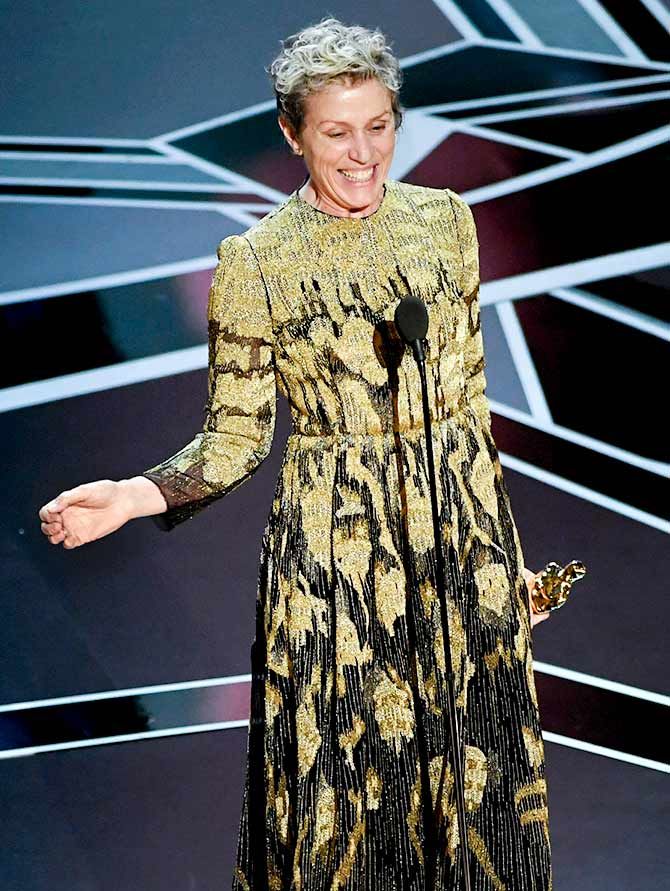 Then there was the most dramatic moment of the evening.

Towards the end of the show Frances McDormand came on stage to receive her Best Actress trophy.

Her win for Three Billboards Outside Ebbing, Missouri was expected. But after thanking her cast, crew and family, McDormand placed the trophy on the floor.

And she asked all the female nominees in the audience -- Those who had been nominated in different categories to stand up.

'Meryl, if you do it everyone else, will,' she said to Meryl Streep who was seated in the first row. People cheered and McDormand laughed. She then said, 'OK look around everybody... because we all have stories to tell and projects we need to finance.'

She then suggested that industry leaders should speak to all of these women in the next few days to make the projects happen. 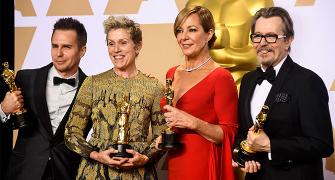 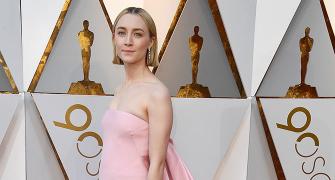 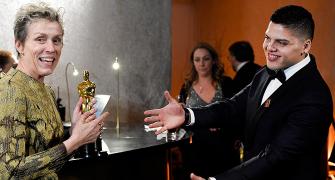 'We all have stories to tell and projects we need financed' 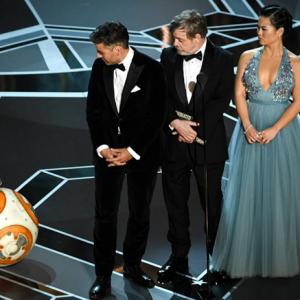 The best presenter at Oscars 2018 was not a human!