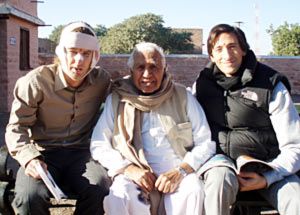 Actor Kumar Pallana, 94, who passed away on October 10, has acted in films like in Bottle Rocket, Rushmore, The Royal Tenenbaums and The Darjeeling Limited. Aseem Chhabra pays tribute.

It was Anderson’s first work and I had no idea what to expect from this very indie film that starred the director’s friends from Dallas -- the brothers Owen and Luke Wilson, and James Caan.

I liked Bottle Rocket. It had the beginning signs of the endearing idiosyncratic qualities of Anderson’s narrative style that we would start to recognise in his future films.

But most of all I was drawn to an elderly lovable Indian man in the film -- Kumar Pallana, who played Kumar, a clueless collaborator with the young criminals.

I saw him again as the groundskeeper Mr LittleJeans in Rushmore (1998) and then in a substantially larger role as Gene Hackman’s housekeeper Pagoda in The Royal Tenenbaums (2001). At one point the delightful Pallana even stabs Hackman in the film.

It was then that the journalist in me set out to search for Pallana. The Internet search led me to Cosmic Cup, a coffee shop in Dallas and eventually to Pallana’s home in California’s Bay Area where he lived with his actor son Dipak.

One interview later Pallana became a friend of mine -- like an elderly uncle who would often call to wish me Happy New Year, Diwali greetings or to inform me that he was acting in a small independent film.

Once when I was visiting Boston he called to inform me that Steven Spielberg had cast him in The Terminal. He was very happy about that role.

Another time he called because he had heard that Dev Anand was shooting Love at Times Square. Pallana asked for my help in getting a role in that film.

He would call quite regularly, and sometimes if I was busy, I would not take his calls. Then he would leave a voice message, always starting with these words: “Asheem bhaee, dis eez Kumar Pallana.” He had a heavy Indian accent, coupled with a slight lisp.

This morning I woke up to learn that Pallana had passed away at the age of 94. It is sad news, since I had only recently heard that he was still in good health.

Pallana had lived a full, rich life. He was a warm, humble, unassuming man, who never let his connections with celebrities go to his head. He was not in awe of them.

Rather, he talked about them as if they were regular human beings like him. And perhaps that is what people like Anderson and Spielberg found most attractive about him.

In 2001 at a press conference for The Royal Tenenbaums, in Los Angeles, he shared the stage with the director and other cast members of the film, including Hackman, Anjelica Huston and Gwyneth Paltrow.

“Mr Pallana, you are from India,” one of the reporters at the press conference asked him. “So how come we haven’t seen you in a Bollywood film?”

“I told him, ‘I am a small fish, my friend,” Pallana said, narrating the story to me. “Anybody can swallow me. That is why you don’t see me.”

I first interviewed Pallana in the fall of 2001 around the time The Royal Tenenbaums played at the New York Film Festival. We spoke on the phone for nearly an hour.

Pallana had many stories to narrate, but also he had the habit of jumping from one issue to another, while I would be trying to steer him in the direction of the question I had posed.

He told me about his adventures when he first arrived in the US in the 1940s on a cruise ship where he would perform juggling acts with plates, chairs and other objects.

In the US he taught yoga, acted as an extra in many Hollywood films -- he couldn’t recall the names -- got married, had a family and then divorced.

In the 1990s, when he was leading a semi-retired

life in Dallas working out of Cosmic Cup that his son ran, Pallana met Wes Anderson and the Wilson brothers. The three friends from college would frequent the coffee shop and were drawn to Pallana’s charm, his wit, plus his juggling skills.

At the end of the interview, Pallana suggested that I should also talk to Anderson. A day later, as I was getting into the elevator in my apartment, my cell phone rang. It was Anderson calling to talk to me about Pallana.

“When Owen and I started going to the Cosmic Cup, Kumar would be teaching yoga upstairs in his house,” Anderson told me. “He sort of had a following of people in the neighbourhood. He would sit and talk and there were always people around him. So you could tell that he was a real character. He is funny and he is great looking.”

Around that time, Anderson and Wilson were working on their first script and were excited about the prospect of casting Pallana in their film.

“When we were writing Bottle Rocket, it was only when we thought of putting Kumar in it that we began to realise what kind of a movie it would be. That it would be more of a comedy and a gentler sort of a movie, rather than a story about a crime. We were so happy with his work that we always wanted to have him in our movies.”

Anderson said that he did not plan for Pallana to have such a significant screen presence (although with few speaking lines) in The Royal Tenenbaums. But Pagoda’s role grew as the director sat down to write his script.

A month later I met Pallana at the Regency Hotel in New York City. He had asked me to join him for breakfast and he insisted that I should eat as much as I wanted to. He reminded me that Walt Disney Pictures (distributors of The Royal Tenenbaums) were picking up the tab for his stay in New York City.

That evening Pallana represented The Royal Tenenbaums at a screening at the Walter Reade Theatre. Anderson spoke to the audience via satellite and then he asked Pallana to perform his juggling act with plates. What a delightful moment that was!

The film’s director Bret Carr told me that even though Pallana had a small role in the film with hardly any dialogues, he was so drawn to the man that he was going to cast him no matter what.

That is also what Anderson told me during an interview for The Darjeeling Limited. In that film Pallana was a passenger in a train in India carrying three eccentric brothers played by Owen Wilson, Adrien Brody and Jason Schwartzman. Pallana had no dialogues in the film and perhaps he was playing a minister on a journey.

Anderson said he could not find a role for Pallana in the film’s script. But he could not imagine shooting a film in India and not have Pallana participate in it.

So, just as The Darjeeling Limited was Anderson’s tribute to Satyajit Ray (the director used many of the Indian master’s compositions in the film), it was also a salute to Pallana and his friendship with Anderson and the Wilson brothers.

Eventually, Pallana did not get a lot of film work. Anderson was realistic about it.

“I would certainly hope he would get parts in other movies, but there are limitations to the roles he can get,” Anderson said during The Royal Tenenbaums interview. “But if people think of him and make parts for him, there are always opportunities there.”

A couple of months ago I had sent a text message to Dipak Pallana asking how his father was doing. Dipak wrote back to me that his father was well, teaching yoga in Dallas. I had planned to call him, but then I got busy with my life.

I am sad that he has passed away. I still hear the voice of my elderly friend speaking to me in my head. “Asheem bhaee, dis eez Kumar Pallana.”
Aseem Chhabra in New York
Related News: Kumar Pallana, Royal Tenenbaums, Wes Anderson, Bottle Rocket, Wes Andersonrsquo
SHARE THIS STORYCOMMENT
Print this article