Long before the Oscars and many other awards Slumdog Millionaire [Images] received in the last six weeks, director Danny Boyle [Images] was emphasizing the importance of smaller distributors and moaning their decline.

And on Oscar night, while he saluted the major contributors to the film's success including the American distributor Fox Searchlight (not to forget Mumbaikars, who he said 'dwarf even this guy', pointing at the statuette), some remembered the way the specialty wings of major studios - Warner Independent and Paramount Vantage - were closed down in the last year or so because they were not bringing in huge returns.

Fox Searchlight, one of the last remaining art-house divisions of a major studio, brought the rights to Slumdog from Warner Independent; the rest is more than box-office history.

It brought the first best picture Oscar top Fox Searchlight which has missed the accolade in the past as some of its award-winning films including Little Miss Sunshine and Sideways had become some of the most successful and honored small films of the last two decades.

Now, Slumdog could become the highest grossing film for the studio in North America, going past the $140 million grossed by another terrific film, Juno.

The Danny Boyle film is no more a sleeper hit - meaning a film that maintains a low profile but has a steady run over months and months. Armed with the Oscars and a load of unprecedented publicity, Slumdog is now getting the treatment of a star-driven, mainstream Hollywood film. 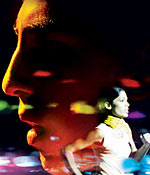 Though Warner Independent sold the rights to Fox Searchlight, the parent company still stands to gain from the movie, according to trade publications, as it could get about 20 per cent of the film's revenues in North America according to its the agreement with Searchlight.

'Slumdog Millionaire's wins should send a huge message to Hollywood: Don't overlook the little guy,' wrote Claudia Puig in USA Today. 'The reality is, movies like Slumdog, if they get made at all,' added Puig, one of the earliest reviewers to rave about the film, 'will more likely be distributed through less conventional methods such as the Internet.'

If Hollywood wants to remain relevant, it should remember this little film that could, she warned. 'Or, eventually, the Net will be the big winner.'

The three-and-half hour Oscar broadcast was watched by some 40 million viewers in America, according to prelim reports; an 8 per cent jump from the previous year.

Across the world from Uruguay to Germany [Images] to Singapore, Slumdog is being released by independent distributors. At Fox Searchlight, there was understandably huge excitement over the film's success.

'I think it demonstrates that a good story well told, whether it is about someone in Mumbai [Images], China or around the corner, will find an audience,' Nancy Utley, chief operating officer, Fox Searchlight, was quoted in The New York Times as saying. 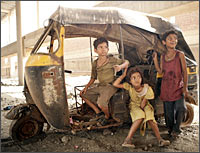 She also revealed that Fox Searchlight knew it had a winner when it screen-tested the film in Orange County, California last summer without any marketing or explanation, and there was a spontaneous welcome for it. Soon the film was traveling to a few crucial festivals including Toronto International Film Festival.

At the Oscars, Boyle thanked in particular Peter Rice of Searchlight. For when Warner Independent decided not to release the film, Rice stepped in and showed the film to his senior staff - including Utley.

'If the Warner Bros screening of Slumdog Millionaire had been restrained, this was breathtaking, complete with applause at the end,' the Los Angeles Times reported in an article titled, 'Slumdog: From mutt to 'Millionaire'.

Though Warner did not want to take up the film, and thought of dumping it in the DVD market with an obligatory one or two week run in a handful of theaters, Boyle thought it did the courageous things and sold the film to Searchlight. Producer Christian Colson too has acknowledged the importance of the gesture.

'Warners did the right thing a little slowly, which is why we got twitchy,' he told LA Times discussing why he wanted another studio to look at his movie. 'But they still have a chunk of the movie, and I hope they make a lot of money because in the end, they did the right thing.'

Colson and Boyle readily admit that while they expected the film to be a success, they never thought it would be a huge hit.