After an elaborate wedding on April 20, where the who's who of Bollywood were invited, it was time for Aishwarya Rai's bidaai ceremony.

The bidaai -- where the bride says goodbye to her parents and relatives, and leaves for her husband's home -- took place at Ash's Bandra home, La Mer.

At about 5:30 pm, the Bachchans left with Ash for Prateeksha.

As the car was entering the bungalow, some photographers, who were trying to get pictures, were manhandled by a Black Cat commando. One of the photographers -- B L Soni from Daily News and Analysis -- was injured and fainted; he is being taken to hospital. Another photographer has suffered bruises.

Other photographers have started protesting just outside the gates of Prateeksha, demanding that Amitabh come out and apologise. 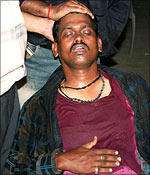 The police is trying to control the situation, which has turned quite chaotic.

Earlier, the Bachchan family arrived at Aishwarya's home at 3 pm. Amitabh Bachchan drove the car himself, while close friend and Samajwadi Party leader Amar Singh sat beside him. Jaya Bachchan and Shweta arrived in another car.

A white BMW, decorated with white flowers, followed the Bachchans into La Mer.

Hari Singh, Ash's business manager said, "Ash was emotional during the bidaai but she did not cry."

But even before they arrived with the newly-wed bride, close friends like Goldie Behl and wife Sonali, Sikander Kher, Kirron Kher and Tina Ambani had already reached Prateeksha to welcome them.

Meanwhile, Abhishek and Ash are likely to visit the Balaji temple in Tirupati to seek blessings, sources say.

"The couple, accompanied by Abhishek's parents, will visit Balaji temple in Tirupati. But it is not known when they would go. They could leave tomorrow or perhaps in the next two or three days. The schedule is still being planned," the source told PTI.