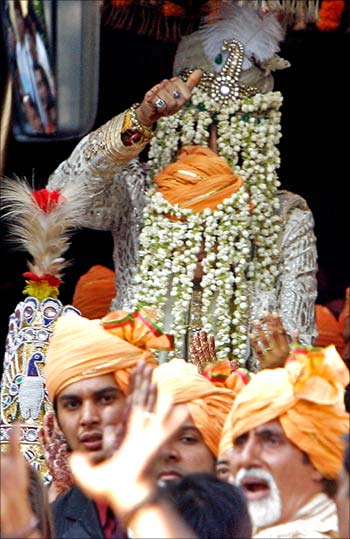 After much partying, rituals and tradition, Abhishek Bachchan is finally getting ready to marry Aishwarya Rai at his father's home, Prateeksha.

The road outside his home is filled with fans, media and onlookers, as one of the biggest weddings this year is about to start in a few minutes.

Ash arrived with her mother Brinda at 2:10 pm, in a grey Mercedes car decorated wtih roses and white flowers. The car pulled right into Prateeksha and a posse of security guards surrounding the vehicle so that the media could not get a glimpse of the bride. Ash's brother Aditya followed in another car, while the rest of her family arrived in a Volvo.

Apparently, the bride has chosen a maroon Kangeevaram sari for her special day.

The bungalow has been decorated in South Indian fashion, with orange and yellow marigold flowers, and banana leaves and fruits. Ash, for those who don't know, hails from the Bunt community.

Amitabh Bachchan's close friend Amar Singh was among the first to arrive at Prateeksha. Other first arrivals were filmmakers J P Dutta (on the sets of whose film Umrao Jaan, Ash and Abhishek apparently fell in love) and Romesh Sharma (who directed Amitabh in Dil Jo Bhi Kahey), Shammi Kapoor and his wife, and Danny Denzongpa.

Band players, in white uniforms and colourful turbans, played loudly, while traffic outside the bungalow virtually came to a standstill. Later, dancers, dressed in traditional Punjabi wear, joined them, and danced as the Bachchans arrived at Prateeksha.

Abhishek, in a gold-embroidered white sherwani, made his way on horseback for a portion of the distance from Jalsa to Prateeksha. Shweta's son Agastya sat astride with him, while Amitabh, Jaya and Shweta danced to film songs like Kajra re and Aaj Mere Yaar Ki Shaadi Hai.

Later, the Bachchan family got into a Volvo, and travelled the rest of the distance to Prateeksha in that.

Kajol, who seems to be close to the Bachchan family, arrived in a mehndi-coloured sari with a blue shimming border. Ashutosh Gowarikar, who is presently directing Ash in the historical Jodha Akbar, arrived with his wife Sunita.

By the time the baraat had entered Prateeksha, the crowds went ballistic, and police were forced to raise their sticks to control the crowds.

Ram Gopal Varma was one of the first guests to exit.