Six epics, each more complex and grander than the previous one.
Hundreds of compelling characters.
Samyukta Lakshman provides a guide to 27 characters you must know in arguably the most important movie series of all time.

"Have you ever encountered a Jedi Knight before, sir?"

Anakin Skywalker/Darth Vader
A Jedi prodigy who metamorphs into the menacing Sith Lord -� Darth Vader. Anakin Skywalker (played by Hayden Christensen) is an expert pilot under the apprenticeship of Obi-Wan Kenobi. But Anakin is headstrong and reckless, he grows impatient with his master's slow methods and a quicker path to power beckons -- the Dark Side, the subject of the latest Star Wars film, which opens worldwide this weekend.

In the last three films, released in 1977 and the early 1980s, Darth Vader terrorises the galaxy and makes life a living hell for his children, Luke Skywalker and Princess Leia. 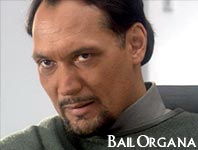 Bail Organa of Alderaan
Princess Leia's foster father and founder of the Rebel Alliance. Elected to the Galactic Senate. He perishes when his planet is reduced to an asteroid field by the first Death Star. Played by the charismatic actor Jimmy Smits from NYPD Blue and The West Wing.

Boba Fett
A fearsome bounty hunter like his dad Jango Fett (seen in the Attack of the Clones). Boba captures Captain Han Solo and hands him over to Jabba the Hutt.

Chewbacca
A 200-year-old Wookiee from the planet Kashyyyk. A friend of Han Solo and his co-pilot on the Millennium Falcon.

Count Dooku/Darth Tyrannus
Jedi master to Qui-Gon Jinn. He turned to the Dark Side and heads the separatist forces, triggering off the clone wars. Dooku is responsible for slicing Anakin's hand off.

C-3PO & R2D2
The galaxy's most lovable droids and two of the biggest stars of the Star Wars saga.

Threepio is a gold-coloured, multilingual protocol droid built by Anakin and later owned by Luke and Leia.

Artoo is an astromech droid and Threepio's trusted sidekick who will risk destruction for its master. 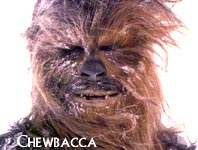 Darth Maul
A pre-Darth Vader Sith Lord with a double-bladed lightsabre and a red tattooed face. An evil tool of the Emperor Palpatine/Darth Sidious (see below), Maul is slain in a duel with Obi-Wan Kenobi in The Phantom Menace.

A planet annihilating imperial battle station destroyed by Luke Skywalker. A second Death Star was created containing 30,000 turbolaser cannons. The latter was destroyed in the Battle of Endor towards the end of the Return of the Jedi.

Formerly an obscure senator from the planet of Naboo he becomes Supreme Chancellor of the Galactic Senate. As Darth Sidious, he is master to Darth Maul and Count Dooku. In the last days of the Old Republic, Palpatine turns into a megalomaniac dictator killing all except two of the Jedi knights. 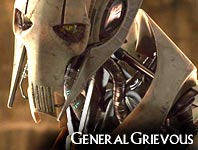 A baddie who is part alien, part droid. He leads the separatist droid army. According to George Lucas, Grievous' appearance fortells what happens to Anakin.

The reckless Corellian pirate who pilots the Millennium Falcon. Played with great spirit and zest by Harrison Ford in a career-making role, he becomes a Rebellion hero and hooks up with Princess Leia in the Return Of The Jedi.

Han Solo's friend and an Alliance hero. Lost the Millennium Falcon to Han Solo in a game of gambling.

Anakin and Padme Amidala's son goes from being a farmboy to a supercool Jedi knight. An Alliance hero (played by Mark Hamill who unfortunately hasn't had much luck with his roles since), he makes his peace with his dad, Darth Vader, at the end of Return Of The Jedi. Starts a Jedi academy after the Battle of Endor.

A Jedi Council elder famed for his wisdom and experience, played in The Phantom Menace, Attack Of The Clones and the latest film by the super cool Samuel L Jackson.Millennium Falcon
Han Solo's Corellian spaceship which was branded 'a piece of junk' by Luke Skywalker on first sight.

Queen Amidala's homeplanet, which is the centre of action in The Phantom Menace. 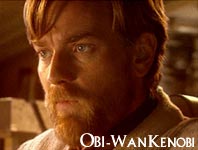 Cautious and disciplined, Obi-Wan Kenobi has matured into an experienced Jedi Knight. He strives to honour his Master Qui-Gon Jin's final wish by training Anakin Skywalker to become a Jedi. He fought in the Clone Wars but retreated to the wastelands on Tatooine to live an anonymous life away from Darth Vader. Played with magnificient dignity with Sir Alec Guinness in the first Star Wars films to be released, and Ewan McGregor with sexy charm in the most recent Star Wars films.

They used to live on Tatooine and brought up Luke Skywalker in anonymity.

She is the former queen-turned-senator from Naboo. She marries Anakin and gives birth to Luke and Leia. A fearless and idealistic woman, she is determined to achieve peace in the galaxy. Played by Natalie Portman [Images].

A determined heroine with a cinnamon bun hairdo and gold bikini who forms the heart of the Alliance. She is raised away from her brother Luke, in the royal household of Alderaan. Played with spunk by Carrie Fisher.

A maverick master and mentor to Obi-Wan Kenobi. He discovers Anakin Skywalker. Qui-Gon is slain by Darth Maul in The Phantom Menace.

A cult of renegade Jedi who gave into the dark side of the Force. The cult was built in opposition to the Jedi. The Sith only believe in domination.

Home planet of Anakin and Luke Skywalker. The whole planet is a single desert orbiting around its two suns.

The Rebel Alliance's primary and highly advanced starship. Named after its double-layered wings. Yoda
900-year-old Jedi master who trained Obi-Wan Kenobi and Luke Skywalker. A senior Jedi of the Jedi Council he is highly regarded for his wisdom, patience and skills with the lightsabre. His depth in the Force makes up for his lack of height. He retreats to the swamp planet on Dagobah when Darth Vader goes on a killing spree.