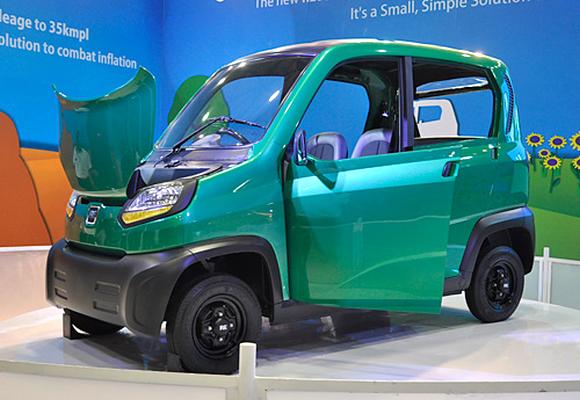 In Delhi, auto-rickshaws ferry over 20 lakh (two million) passengers every day, nearly as many as the city's swanky metro service does (around 2.2 million). Or about half the number of passengers that take the Delhi Transport Corporation buses every day (4.5 million).

In smaller cities like Agra or Allahabad, say transport economists, nearly half of all the motorised trips are made on three-wheelers.

From these numbers, a large part of the burden of transporting people from one place to another seems to have fallen on the ubiquitous three-wheelers.

Taxis are expensive and finding one is not easy. Buses are overcrowded and unpunctual and they are either racing to overtake their rivals or stopping frequently to take on as many passengers as possible. Autos, therefore, provide a relatively affordable option for travel.

However, last week, the government added a new alternative for commuters. It allowed quadricycles, an upgraded auto-rickshaw with four wheels and doors, for intra-city transportation, albeit with some riders.

For now, quadricycles can be used only for commercial use within cities and cannot run on highways. Besides, they will have to meet stringent emission norms. 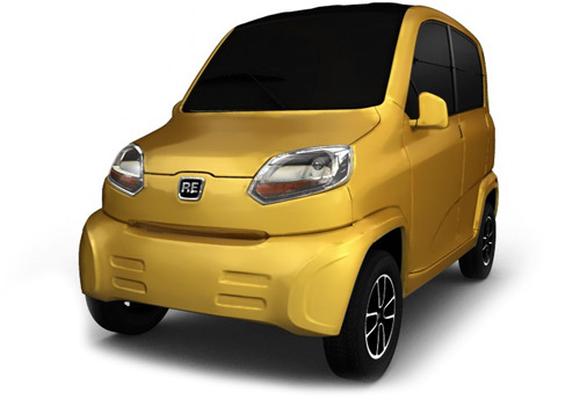 The idea, if it catches on, promises to fundamentally change the country's transport economy. The first quadricycle on the road is likely to be Bajaj Auto's RE60.

The company has the product ready and had been fighting hard to get the vehicle approved by the government. It hopes to sell at least 5,000 quadricycles every month.

The new vehicle could provide commuters an option between the three-wheelers and the taxis. Experts say it will fill the requirement of those who want to upgrade to a taxi but are deterred by high fares.

Taxi fares are generally double that of an auto. Besides, taxis are also in short supply in most cities.

Rajiv Bajaj, managing director of Bajaj Auto, says the quadricycles will not cannibalise the three-wheelers. He believes the two could co-exist and expand the portfolio of affordable transportation. 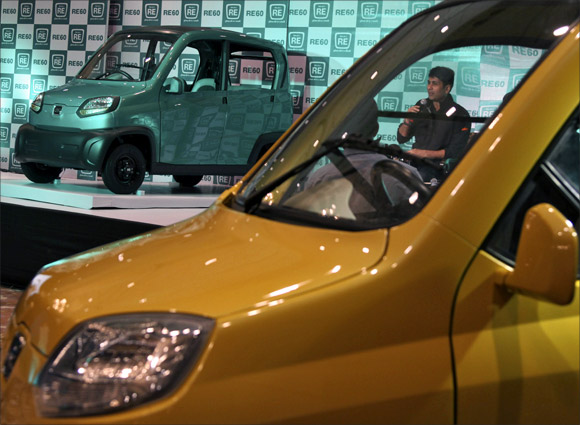 Image: Bajaj's Managing Director Rajiv Bajaj is seen through the windows of RE60.
Photographs: B Mathur/Reuters

How big is this an opportunity for Bajaj Auto? Under the new policy, quadricyles cannot become an alternative to passenger cars.

Also, that would require considerable jazzing up of the model and more safety tests. But many experts say it could happen over the next four to five years.

Says Dinesh Mohan, Volvo Chair Professor Emeritus in the Transportation Research and Injury Prevention Program at IIT Delhi: "In the near future we could have two kinds of car models, one like the RE 60 which cannot go over an average 50 kmph but are safe vehicles for daily use, and two, vehicles that speed beyond 50 kmph which you will use on highways or for longer distances".

Such a change would bring in new buyers who cannot afford a car at present. It could also encourage families, which already own a car to buy another vehicle for the daily commute of other family members.

In India, average occupancy of a car is just 1.7 to 1.8. Assuming that a family has at least four members, the occupancy level leaves enough room for another vehicle for the household. For quadricycles, this could be a huge market. 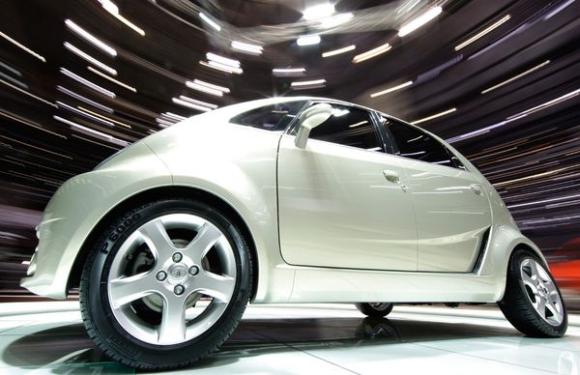 Of course, a lot would depend on the price of the upgraded RE60 in comparison to other ultra-small cars like the Nano.

Compared to the Nano's Rs 153,000 ex-showroom tag currently, RE60 may not have much of an advantage, considering its engine capacity is nearly one-third of the Nano's.

However, the RE60's key selling point will be its fuel efficiency. The vehicle claims to give 35 km to a litre compared to the Nano's 25.4 km to a litre.

The quadricycle could also come in handy for moving goods within the city. Currently, the government has paid little thought in this direction, but goods transportation could open up new market for the vehicle. 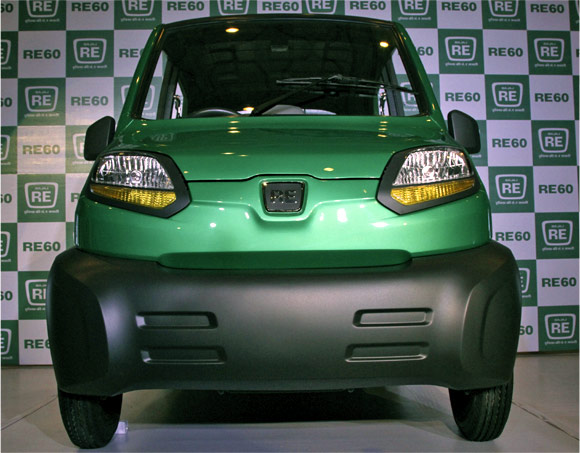 The opportunity here is massive: companies could use the vehicle to deliver goods to kirana stores, e-commerce sites to their customers, sellers of consumer goods such as TV sets and fridges could use it to ship their orders, and so on.

As of now companies use an array of transport option - vans, tempos, cars, Matadors - to ferry goods.

The RE60 could position itself as an attractive urban goods carrier with some modifications.

Says Mohan: "The RE60 has to be customised and designed to meet the specific transportation needs for delivering TV sets, lifestyle products or pizzas. That would be the challenge. Of course, the government has to make clear rules and regulations on its usage."

The vehicle could also function as a mini ambulance for cases where a patient does not need to be carried on a stretcher.

However, many have their reservations about the vehicle's safety and environment-friendliness. 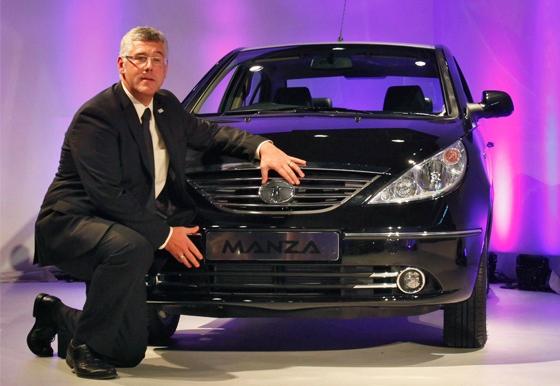 Tata Motors Managing Director Karl Slym, who is struggling to sell the Nano, says that allowing quadricycles is a regressive step.

"The government and industry have been accelerating efforts in traffic safety and environment, now we consider a quadricycle. Why go backwards?" he had tweeted. However, he has not ruled out the possibility of entering the segment in the future.

Most of the concerns over the safety are based on a European Safety Council report which says that quadricycles have a fatality risk 10 to 14 times higher than other cars.

Bajaj Auto brushes aside these doubts. As for the RE60's green credentials, it claims the emissions from the RE60 at 60 grams of Co2 per km is substantially lower than pollution norms of most available cars in the market. 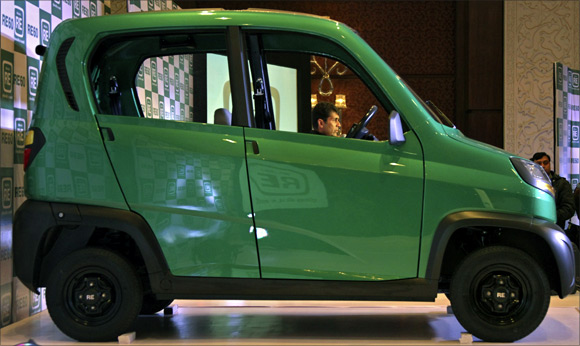 Also, some say slower vehicles are less likely to be involved in road accidents. A study undertaken in six Indian cities by Mohan's team at IIT shows that three-wheelers are no less safe nor more accident-prone than cars.

According to government data, the share of auto rickshaws in the total road accidents in India is only 7.3 per cent compared to 21. 8 per cent for cars and over 23 per cent for two wheelers.

There are other areas where quadricycles score over cars. For one, they require less space than a car on the road, and two, with a mass weight which is one-third that of an average car, there is less wear and tear of the road.

With these advantages to boot, the quadricycle could create a substantial market for itself in the country's transportation system.