Will reforms bring realty investors back?

The inventory has risen to 83 months in the National Capital Region and 50 months in Mumbai. 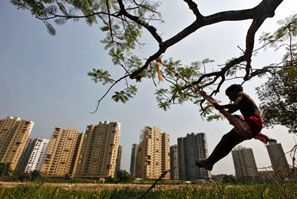 Real estate is grappling with a crisis of confidence. Investors' trust in developers to deliver on their promises is close to zero.

There is good reason for it. Projects have seen long delays. Specifications have been altered.

Will the creation of the Real Estate Regulatory Authority, which should be in place in a few years, restore the confidence?

That is the intent. Buyers will have a forum to register their grievances against developers. It will also address the issue of black money in the sector.

On April 7, the Narendra Modi government cleared the amendments in the Real Estate (Regulation and Development) Bill, 2013 in a Cabinet meeting.

It was tabled in the Rajya Sabha but was referred to the Select Committee after the Opposition called the Bill pro-developers. Even Congress Vice-president Rahul Gandhi joined the debate after meeting some aggrieved buyers at his party's headquarters in New Delhi.

In the making since 2009, the revised Bill mandates developers to deposit 50 per cent of the money (in the earlier version, it was 70 per cent) collected from the buyers in a project within 15 days into a separate bank account to be used for construction of that project.

Developers will be penalised for violation of rules and can even be imprisoned.

Developers, both in the residential and commercial sectors, will be required to register their projects with the regulatory authority and will have to mandatorily disclose all information regarding the promoters, project, layout plan, schedule of development works, land status, statutory approvals et cetera.

The objective of the Bill is to introduce transparency and accountability in the realty sector, besides clamping down on erring developers.

According to experts, developers will not be able to launch any new project without prior permissions and divert funds from one project to another, the main reason for delays in the projects.

Shishir Baijal, chairman of real estate consultancy firm, Knight Frank India says, "The Bill will help bring back customers who have been sitting on the fence. The expected transparency is likely to help developers borrow funds at competitive rates, helping in rationalisation of property prices."

That should help the sector which has been stuck with a huge pileup of unsold stock. The inventory has risen to 83 months in the National Capital Region and 50 months in the Mumbai Metropolitan Region. A healthy market maintains an inventory of eight months.

In the new Bill, developers will also not be allowed to change structural designs without the consent of two-third of the buyers in the project.

The move will prevent alterations, as done by DLF and Supertech. The two companies have been taken to courts by their buyers for changing the layout of the project.

With long delays in delivery, buyers have of late resorted to activism - street protests and filings in consumer courts.

Developers often cite issues such as the arduous process of getting requisite approvals, a slowdown in the market, land acquisition hurdles and funding constraints for delays.

"The new Bill will address all these concerns. Developers will not be able to launch projects without prior approvals and will have to inform the regulator about the status and the schedule of all projects, helping buyers track their homes," according to an expert based in Mumbai.

Anuj Puri, chairman and country head, JLL India, says, "The Bill will instill more confidence into global investors, providing better access to structured capital. However, the non-inclusion of government agencies, whose slow approval processes are a major contributor to project delays, remains an issue and needs to be addressed."