News
Business
Movies
Sports
Cricket
Get Ahead
Money Tips
Shopping
Sign in  |  Create a Rediffmail account
Rediff.com  » Business » Whose Rasgulla is it anyway?

Whose Rasgulla is it anyway? 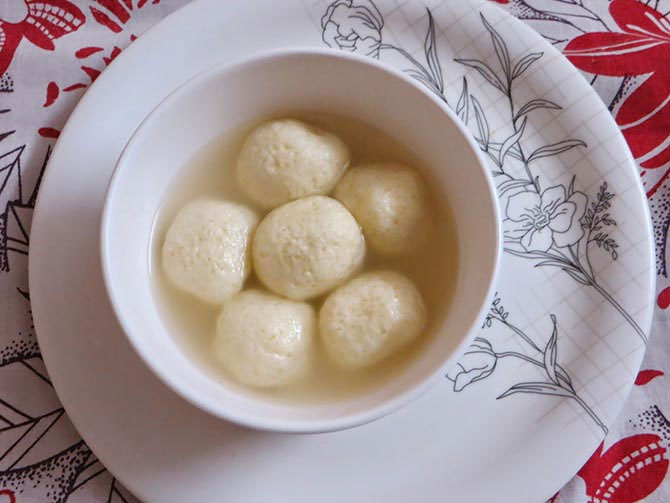 Odisha government on Friday claimed to have found a new evidence about the origin of 'Rasgulla' in the state to bolster its case for getting the GI tag for the sweet, for which West Bengal is also a claimant.

"Now we have collected authentic evidence about the availability of Rasgulla in Odisha prior to 1500 AD," Science and Technology Minister Pradeep Kumar Panigrahi said.

The minister's claim was based on a report prepared by the expert committee set up to collect evidence in favour of Odisha's demand for geographical indication (GI) tag for the sweet, known in West Bengal as Rasogolla.

"Committee member Asit Mohanty has submitted evidence regarding existence of Rasgulla in Odisha before 1,500 AD. The department will examine the report and take appropriate steps within two weeks to present the evidence before the central government," Panigrahi said.

The Commitee has presented a 27-page research paper and a 100-page document comprising 75 points proving that Rasgulla originated in Odisha.

"Odisha will definitely get the GI tag on Rasgulla as the West Bengal government hasn't applied for the same due to lack of concrete evidence to support its claims," Mohanty said.

The committee in its report said Rasgoola as a sweet was cited in 'Dandee Ramayana', the Odia adaptation of the Valmiki Ramayana by sage poet Balarama Das.

Further, Dandee Ramayana has featured in World e-Book of 1921 published by Calcutta University which has mention of Rasgoola's association with traditions and practices associated with Lord Jagannath, Mohanty said.

He claimed that the sweet was being offered to gods in mutts and temples of Odisha for over 600 years.

The committee also refuted Bengal's claim that Rasgulla came to Odisha under the influence of Shri Chaitanya. The Mohanty committee in its report has also mentioned that selections from Odia literature published by Calcutta University in 1924 had references to the sweet's origin in Odisha.

The sweet traders in the state will observe a Rasgulla Day on Saturday on occasion of Lord Jagannath's "Niladri Vije" (return to the temple after annual ratha jatra).