In his last bestseller he sought answers to the importance of being good using the epic Mahabharata as a reference point and now author and economist Gurcharan Das sets out to discover success secrets of young entrepreneurs.

Das' book 'The Difficulty of Being Good' published in 2009 scrutinised the weaknesses of epic characters such as Bhishma, Draupadi, Duryodhana and Krishna, examining the ethical problems they had to face in that era and looked at the significance of the is 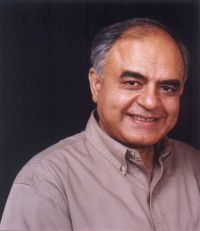 In a new show 'The Dharma of Capitalism' on Bloomberg UTV, the author converses with a range of young entrepreneurs to discuss if post recession capitalism must seek and find a new raison d'etre, a new dharma.

"After I interviewed prominent personalties like Nandan Nilekani of Infosys, political commentator Ashish Nandi and past Nasscom president Kiran Karnaik as part of a television show I was persuaded to talk to young entrepreneurs next," Das told PTI.

Nine episodes of the show have already been shot in which Das speaks to Fortis brothers Malvinder and Shivinder, microfinance entrepreneur Vikram Akula, Rajiv Bajaj of Bajaj Auto, Ramesh and Swati Ramanathan of NGO Janagrahaa among others.

"I have interviewed corporate lawyer Zia Mody who is the sole woman among my interviewees. I am also trying get Ekta Kapoor because she has created a successful business in TV serials, "says Das.

Among the broad spectrum of people, Das says he tries to get them to talk about their moral failures while trying to set up business.

"Say for example what do they do when faced with the dilemma of paying a bribe to get things moving," questions Das.

The author, who graduated from Harvard University also debates the true meaning of capitalism and its future while seeking answers to the question whether or not the age of conscious capitalism has finally dawned.

Incidentally Lalit Modi, the suspended IPL commissioner was scheduled to be interviewed by Das. "Modi agreed to be on the show before all the mess on IPL," says Das. "I am still hopeful that he will come and like he said be tough on the dharma of capitalism."

Lalit Modi's wings to be clipped?