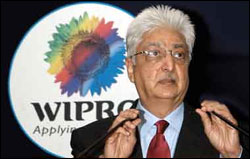 Software major Wipro would continue to expand at its existing facility at Salt Lake in the metropolis, company chairman Azim Premji said today.

"Company will make further investments at the existing development centre at Salt Lake," Premji told reporters after delivering a lecture at CII here.

The company has also sought to set up a second facility at Rajarhat near the metropolis for which the state government has allotted 50 acre of land.

While the first facility was accorded SEZ status, the company was insisting on the same for its Rajarhat campus.

However, the Mamata Banerjee government was principally opposed to granting SEZ status to any such units willing to come to the state.

Asked about the future of the Rajarhat facility, Premji declined to comment.