"This malware is specially designed to sabotage plants and damage industrial systems, instead of stealing personal data. It will seriously threaten pillar industries in China," said Wang, an engineer at the Beijing-headquartered Rising International Software company.

"Once Stuxnet successfully penetrates factory computers in China, those industries may collapse, which would damage national security," he said, adding Stuxnet poses no harm to personal computers or Internet surfers.

Stuxnet spreads by exploiting three holes in Windows, one of which has been patched. Globally, the worm has been found to target Siemens systems mostly in India, Indonesia and Pakistan, but the heaviest infiltration appears to be in Iran, the report said.

According to Wang, there might be large financial groups and nations behind the malicious software.

Eugene Kaspersky, co-founder of security firm Kaspersky said the Stuxnet worm could prove that "we have now entered the age of cyber-warfare.

"I think that this is the turning point...because in the past there were just cyber-criminals, now I am afraid it is the time of cyber-terrorism, cyber-weapons and cyber-wars," Kaspersky said.

He believes that Stuxnet is a working -- and fearsome -- prototype of a cyber-weapon that will lead to the creation of a new arms race in the world.

Global Times interestingly quoted a 'Beijing-based hacker' who too expressed concern. Chinese hackers were blamed for a series of cyber attacks in different countries including India, specially Defence and External Affairs Ministries.

Kang Lingyi, the Beijing-based hacker, said the Stuxnet malware has set off alarms regarding the country's network safety.

"We need to be highly aware of the threat and damage this virus poses. And as Internet connectivity grows drastically, companies' information technology departments should build effective emergency systems to combat computer viruses," he said, adding that the intelligence of Chinese hackers can be used as a tool to defend against cyber threats.

"The picture depicted by anti-virus companies is kind of commercial speculation," Yu said.

"So far we don't see any severe damage done by the virus. New viruses are common nowadays. Both personal Internet surfers and Chinese pillar companies don't need to worry about it at all. They should be alert but not too afraid of it." 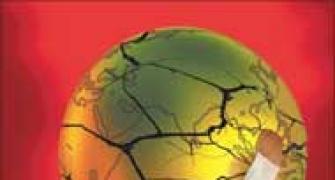 Why India must dump 'crore' & move to 'million'