Cognizant in talks to buy Genpact

Both are listed in the US, but have major delivery centres in India. Investment banking sources said it is still too early to say whether the talks would definitely lead to a deal, but negotiations have entered the final lap.

"We are focused on growth, and that is what our company's leadership is focused on," said N V Tyagarajan, Genpact's COO. A spokesperson for Cognizant said: "As a policy, we do not comment on speculation."

The sources said private equity (PE) players and GE are looking at a possible exit from Genpact. GE, for which Genpact was a captive unit, has around 9.1 per cent stake in the company, while PE firms General Atlantic and Oak Hill hold 41.7 per cent. Besides, Wells Fargo holds 5.71 per cent stake.

The total stake of these PE players, which constitutes around 121.98 million shares, would at the current closing price of Genpact on the NYSE be valued at over $2 billion. Banking sources put the acquisition size to be much higher.

The combined entity would be over $5.58 billion, very close to India's second-largest IT services company, Infosys Technologies, which expects revenues of $5.81 billion for FY11.

Highly-placed sources in rival organisations say if news of the talks were true, it would be a costly deal for Cognizant. "If it pays a premium of 25-30 per cent on the market value of Genpact, as is being speculated, it hardly makes sense at a time when offshore BPO is expected to be increasingly impacted due to political uncertainties in many developed nations," said one.

However, raising capital for this is certainly not difficult, bankers said. "Since both are listed in the US, they can use stock as currency. Besides, Cognizant is a zero-debt company; it can easily raise money from the market," said a banker on condition of anonymity. Cognizant has $1.65 billion in cash. Genpact has $352 million in cash and debt of $40 million.

Cognizant has been looking for an acquisition target in the BPO segment for some time now. But Genpact will be huge not only in terms of the capital involved, but also from an integration perspective.

BPO operations currently contribute 5 per cent to Cognizant's overall revenues. From a synergy perspective, the combination might just click, said market analysts. Cognizant has been trying to increase its presence in the BPO space.

On the other hand, Genpact has been trying to increase its presence in the IT services segment, which accounts for 16 per cent of its revenues. It expects a flat to low single-digit growth this year. "This contrasts with the more positive growth rates expected by most Indian IT services majors," said a recent Deutsche Bank report on Genpact.

However, many analysts and industry experts are sceptical about the deal. A recent PE industry data report from the US said this was highly unlikely. "Cognizant's preference was always for smaller tuck-in acquisitions and the company always argues that the offshore BPO market is "going through a transition" and by hinting that the "horizontal BPO market (where Genpact is a major player) has matured and that the better growth profile is in the 'vertical BPO' market", said the report.

Since 2005, Cognizant has made nine acquisitions. All of these have been niche. The firm has in the past defined its acquisition philosophy as three-fold: deepen consulting or domain capability, expand geographic footprint and enrich services mix.

"Further, all our acquisitions have been 'tuck-under' acquisitions. You may have noticed that five of the last eight 'tuck-under' acquisitions by Cognizant have been in the consulting or high-end capabilities space (such as programme management and enterprise analytics). This clearly indicates the importance the company is placing on consulting and other high-end capabilities to address structural challenges and mega trends that our clients are facing (such as globalisation, consumerisation, virtualisation) and provide solutions to complex business problems," said one of the senior managers in a recent analyst call.

Besides, a report by US analyst firm Kaufman Bros said, "Cognizant has historically sounded cautious about the BPO market, implying it didn't want the business to get beyond 10-20 per cent of its mix over the longer term, given material differences with its IT business.

Moreover, Genpact derives a full 40 per cent of its mix from GE, which, the report said, has limited up-sell potential for IT work, given that GE is already a very mature client for rivals. 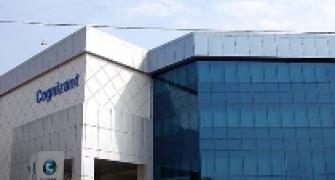 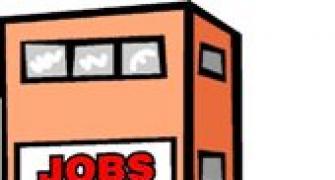 Infy BPO to hire 550, to up investment in Poland 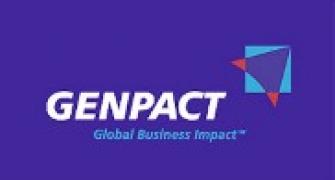 Cognizant, Genpact raise hope amid the IT gloom 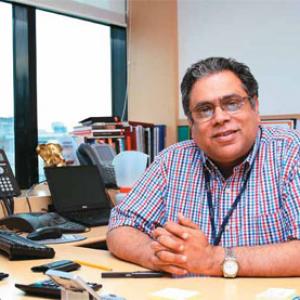