The task to develop the App took almost three years to be completed by a team of experts including an IIT professor, one from the Indian Statistical Institute, he said.

Almost the entire body of work of the poet will now be available for users of Android mobile operating system, courtesy the Society for Natural Language Technology Research.

On the poet's 155-birth anniversary celebrated on May 9, the Society for Natural Language Technology Research, set up under the West Bengal government's Information Technology Department in 2007, has inaugurated the services on an App for Android users.

The App will connect users to the corresponding website on which the SNLTR has digitised the entire literary works of Tagore who single-handedly brought about a renaissance in Bengali literature and music.

"This will help more and more people to read Tagore.

“To be precise, we expect this App to help the young generation to know more about Kabiguru and his works," a senior official of SNLTR told PTI.

The task to develop the App took almost three years to be completed by a team of experts including an IIT professor, one from the Indian Statistical Institute (ISI), he said.

The website, inaugurated in February, 2010, contains all the original writings of Tagore including his poems, stories, novels, dramas, essays and his songs along with their notations.

Besides, it has information related to Tagore, his works such as his biography, information regarding his literary works, letters as well as criticisms.

The site also contains an alphabetical list of all Tagore's works, including poems, stories, novels, dramas, essays and songs, besides all notations of 'Swaralipi' through a link in the text of the song.

It is learnt that the SNLTR is also working on Bangla classics in unicode format.

Besides this, we have digitised the works of Swami Vivekananda, Ramkrishna Kathamrita, Nazrul Rachana Samagro and Sukanto Rachana Samagro. We will shortly upload them on the website and then to the App Installer," he said.

"We are hopeful of uploading it on the website soon. SNLTR is also working on the preservation of Satyajit Ray's Work," he said.

SNLTR has been working on building key-board softwares for five languages including Bengali.

"We have also finished create key-board software for Assamese, Manipuri, Ol Chiki and Odiya. Anybody will be able to download the software free-of-cost and use it for his phone or tablet," the official pointed out.

It must be mentioned here that SNLTR's website has a robust search engine named ‘Anusandhan’ to find out particular words or phrases.

"Even if somebody remembers only the first line of a song or a poem of Tagore and put it on the search engine Anusandhan, the entire notation will be displayed," he stated.

Another feature of the website, ‘Anveshan’ also helps the viewers to achieve the meta-information of a work including the date of a composition besides the main characters of the work, the officer added. 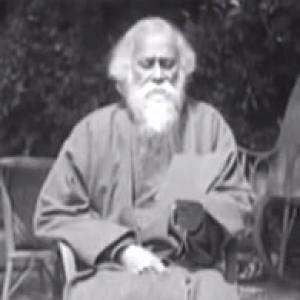 Was Tagore the FOUNDER of microfinance schemes?