News
Business
Movies
Sports
Cricket
Get Ahead
Money Tips
Shopping
Sign in  |  Create a Rediffmail account
Rediff.com  » Business » All you want to know about currency devaluation 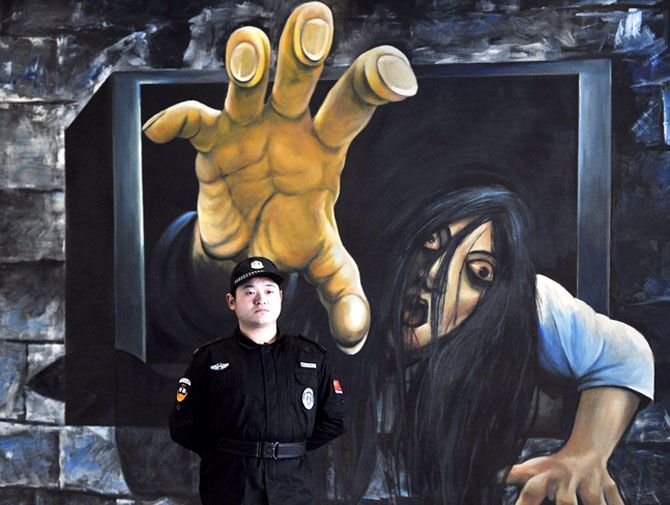 A Chinese security guard stands in front of a 3D painting. Photograph: Reuters

China, in a sudden move devalued it’s currency by 1.9 per cent sending world markets on a downward spiral. Though the depreciation is small, the fact that the country has delinked yuan from the US Dollar and aligned it to the market has created a flutter in global currency and equity markets.

So what are global markets worried about and why is devaluation such a scary word? We take a look at what is devaluation and why do countries use it as a tool to boost their economy.

What a rupee buys for an Indian citizen remains the same but for a tourist traveling to India, it changes. A tourist arriving in India from the USA will get 64.25 rupees for every dollar he wants to exchange, while one coming from europe will get Rs 70.90 for every euro.

Factors determining the value of a currency between the two countries depends on a host of factors like interest rates, inflation, GDP as well as supply and demand of the currencies in question.

Supply and demand will have a meaningful impact on the currency if it is floating, which means it is not pegged to the value of any other currency.

Many countries, especially those in a controlled economy would like to peg their currency against the dollar as it ensures stability. China till yesterday had pegged its currency to the dollar.

Under normal conditions, a stronger economy will have a strong currency while a weaker economy will see the value of its currency depreciating. However, weak currency makes exports from the country viable thus bringing in growth.

Let’s look at this statement through an example. Assume Indian rupee trades at 50 against the dollar. If an exporter of shirts agrees to sell a consignment of $1 million every month for a year he will be earning revenue of Rs 5 crore (Rs 50 million) per consignment. If he makes a profit of 10 per cent on each trade, he will end up earning a profit of Rs 50 lakh per consignment.

Now if for some reason the rupee devalues to say 55 against the dollar, his $1 million sale will earn him a revenue of Rs 5.5 crore (Rs 55 million) and a profit of Rs 55 lakh (Rs 5.5 million). The extra profit earned is beneficial for the exporter, which he can either pocket or use it to undercut his global competitors to get more orders.

The tourist who comes to India will also get more rupee to spend when he comes in when the currency is at 55 rather than at 50. This is the advantage that a weaker currency gives to countries.

Countries who peg their currency are the ones who would like to keep their currency lower to take advantage of the depreciation. Such deliberate downward adjustment to the value of a country's currency, relative to another currency is called devaluation.

Devaluation is used as a policy tool by various countries to infuse growth. Export oriented economies are more sensitive to currency changes and are active in adjusting their linkages.

Weaker currency however makes imports costlier. This is a blessing in disguise for domestic companies affected by cheaper imports.

Currency wars have been fought in the past and will continue in future as countries try to push the boundaries in search of economic growth.