News
Business
Movies
Sports
Cricket
Get Ahead
Money Tips
Shopping
Sign in  |  Create a Rediffmail account
Rediff.com  » Business » At Singapore you shop till you drop

At Singapore you shop till you drop 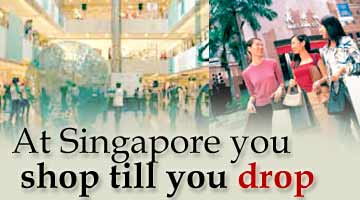 In Singapore, you can't throw a stone without hitting a mall," a fellow hack exclaimed as we boarded Singapore Airlines on our return journey to New Delhi after three days of retail therapy had successfully filled our bags and emptied our wallets.

"We should have carried more money," a fellow journalist had sulked earlier, as she walked away from a Tommy Hilfiger outfit after the nth attempt to convert Singapore dollars into Indian rupees.

Half an hour later I bumped into her at the Raffles mall clutching a bundle of Giordano bags. She trilled in excitement, "Oye! Goto Giordano ...sale...tees...buy two, get one free... Go, go, go!"

Reflex action saw me accelerating towards the Giordano store that is until a board outside The Body Shop caught my eye. "Upto 70 per cent off," said the board tantalisingly, and I entered the carefully displayed world of lotions, creams, body gels, cosmetics and perfumes.

For cosmetic freaks this was the place. While products discounted between 20 to 35 per cent were displayed prominently, it was the magical 70 per cent off that stuck to my mind. "What happened to the 70 per cent discount?"

I asked the sales-girl who sheepishly pointed to a corner where some shower gels and bubble baths were tucked away. The "up to" 70 per cent off was the catch.

In fact, in almost all shops, it seemed to be the mantra to attract customers. It was only after walking through several shops that I realised that most sales were anywhere between 10 to 50 per cent, and that 70 per cent was really a misnomer.

Still, looking down from the third floor of Raffles across the constant surge of people in and out of the innumerable shops, I realised there was something for everyone at the Singapore Shopping Festival (on through July).

These products were selected based on their appeal to shoppers, classic value, international appeal, and availability in at least six of the eight cities surveyed.

Other cities like Sydney, Bangkok, Dubai, Hong Kong, Kuala Lumpur, Shanghai and Tokyo paled in comparison to Singapore, and looking down at the atrium of the Raffles mall, it wasn't difficult to understand why.

A Lego creator show was in session, and children (and adults) were looking at familiar characters from Star Wars, China's Great Wall and Harry Potter creations, all deftly and painstakingly created using Lego building blocks. (Lego offered discounts between 10 and 40 per cent.)

Meanwhile, at Robinsons, our group was ready to raid the mall. The one-stop shop was the perfect choice for those of us who wanted to stuff our bags without a thought to money. While I was on the lookout for ceramics, others were there for the apparel, cosmetics, perfumes, jewellery, handbags, wallets and so on.

That morning I'd read in The Strait Times that "perhaps the worst fashion phase of the eighties could be seen making a comeback in the fashion stores in Singapore during the sale". Indeed, at Robinsons, Far East Plaza and The Heeren, we found off-shoulder tops, miniskirts and even some boxy, shoulder-padded, cropped jackets.While almost all of Singapore swung with the sale, bookstores were busy with booking orders for the sixth Harry Potter book.

Pansing Distribution, the sole distributor of Harry Potter books in Singapore, has already received over 1,50,000 orders, and select restaurants were in on the action, also taking booking orders along with your spaghetti bolognaise.

Shop What, Shop Where?