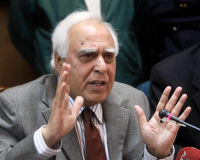 Telecom Minister Kapil Sibal is ikely to meet industry players on Tuesday in order to reach a consensus on issues, including licencing, spectrum allocation, spectrum sharing and mergers and acquisition.

"The minister will meet the telecom industry players on March 8 in order to hold consultations to evolve a 'clear and transparent' regime covering licencing, spectrum allocation, tariffs/pricing, linkage with roll-out performance, spectrum sharing, trading and, mergers and acquisition," said a source. The meeting is part of Sibal's efforts to achieve the 100-day plan for reforms in the telecoms sector in consultation with the industry.

Executives from telecom companies like Bharti airtel, Vodafone, Reliance Communications are likely to be the part of the meeting, source added.

Sibal had in January this year announced formulation of a new and comprehensive National Telecom Policy 2011.

The minister will also discuss a series of proposals on spectrum such as its pricing, capping the amount of airwaves a telco can hold, methodology for awarding additional spectrum and reworking the usage fee for this resource.

Sharing of spectrum and reframing of this resource is another prominent item on the agenda.

Further, other proposals involve initiating discussions on renewal of mobile permits and replacing the rollout obligations with a new methodology to measure if companies are extending their networks.

PM refers Shunglu report on B S Lalli to CBI