The largest-ever foreign investment proposed in India currently lies in no man's land, hobbled by environmental concerns and the inevitable disagreements over the acquisition of land for the enterprise.

Since trade is at the heart of India's swiftly growing relationship with South Korea, it was inevitable that Prime Minister Manmohan Singh himself took the initiative and mentioned the five letter word that has come to epitomise all that has gone wrong with foreign investment in India when he met President Lee Myung-bak on Sunday morning.

Seven years after South Korea's Pohang Iron & Steel Company, Posco, announced the biggest-ever foreign investment in India -- a 12 million ton integrated steel plant in Odisha, worth Rs 540 billion (Rs 54,000 crores/$12 billion) -- the project lies in no man's land, hobbled by environmental concerns and the inevitable disagreements over the acquisition of land for the enterprise.

Dr Singh, well aware that Posco's troubles have come to represent the perils of investing in India, reassured President Lee that Posco's Odisha project is a very important project for India, which he would like to come to fruition at a very early stage.

The prime minister reiterated this assurance when he met Posco CEO Chung Joon-yang at the lunch banquet Lee hosted in the Indian leader's honour later that afternoon.

Unusually, Posco's travails even made it to the communique issued after Dr Singh's one-day official visit to Seoul (he will stay on in the South Korean capital for the next two days for the Nuclear Security Summit): 'The two leaders also reaffirmed the importance of implementing the Posco project in the state of Odisha.'

The day before Dr Singh left for Seoul, Press Trust of India reported that Posco may begin work on its Odisha project in July. After discussions with the Prime Minister's office, the Naveen Patnaik-led state government is likely to hand over 2,700 acres to Posco by June.

The Posco CEO was at India's Ambassador Vishnu Prakash's table at the banquet and when reporters asked the Indian envoy for his impressions of the encounter, he felt South Korean businessmen "take a long-term view of India. They know India is a democracy and land is an emotive issue in our country. They appreciate the issues involved and recognise that India will be a $2 trillion economy by 2016."

The company has also established coil processing units at Chennai, Gurgaon and Pune. None of these have confronted the difficulties its signature project in Odisha has encountered.

Hyundai CEO Chung Mong-koo was also at the ambassador's table at lunch, and he told Prakash that his company has invested $2.1 billion in India since 1996. Hyundai -- whose engineering and construction unit was headed by Lee Myung-bak before he became president of South Korea -- manufactured 617,000 cars at its Chennai plant last year, 45% of which were exported to other markets.

On Monday, the prime minister will meet with the who's who of Korean CEOs at an event organised by the four main chambers of that country's business and industry.

Samsung and Hyundai will be there of course, as will be Tata Daewoo; the SsangYong Motor Company (in which Mahindra & Mahindra has a 70% stake); Doosan (which India hopes will invest in its many infrastructure plans), and other smaller entities like Ayurveda Korea, which imports Ayurvedic products from India and blends them with traditional Korean remedies.

LG, which Dr Singh mentioned in his media statement on Sunday ('Companies such as LG, Hyundai and Samsung are already household names in India') will, however, not be present.

South Korea currently has 21 nuclear reactors which provide 40% of the country's electricity; it hopes to build 14 more reactors by 2024 that will take care of 58% of the republic's power requirements.

India plans to generate 63,000 mega watt nuclear power by 2032; it currently generates just 4,800 mwe. Clearly, India's nuclear establishment -- which is represented by one of its leading mandarins, Dr Ravi Bhushan Grover, in the prime minister's official delegation to Seoul -- will hope that KEPC will step up to the plate and build some of the nuclear power plants the country desperately needs. 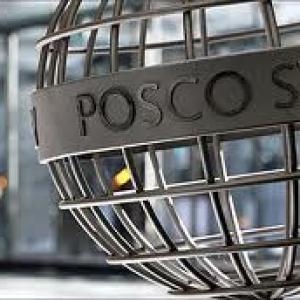 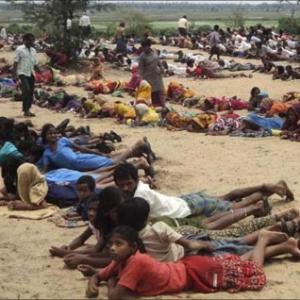 Welcome to the troubled Posco country