A tax checklist for returning NRIs 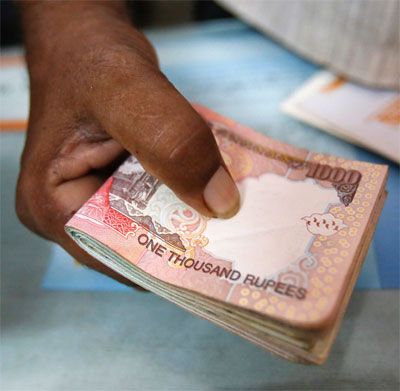 India remains one of the fastest growing economies in the world. For those who are planning to return and settle in India and wish to build a focussed investment portfolio, there’s no better time.

However, adequate care has to be taken to ensure that your hard-earned wealth is properly diversified to minimise risk, is tax efficient and is compliant in all ways with the extant legal framework.

If you have returned to India with the intention to stay back, inform your bank for a change in your residential status in their records and re-designate your existing Non Resident Ordinary (NRO) account to resident Savings account.

The account is a safe way to park your foreign exchange earnings in India. As per the extant RBI regulations, you are allowed to open a Resident Foreign Currency (RFC) Account and credit your foreign exchange earnings. Persons of Indian Origin (PIO) who, having been resident outside India for not less than 1 year, and have become resident on or after April 18, 1992, are eligible to open the account.

Persons who returned to India prior to April 18, 1992 after having been resident outside India for not less than one year provided they hold Returning Indians Foreign Exchange Entitlement (RIFEE) permit are eligible as well. Interest is taxable and there is a penalty on early foreclosure of RFC deposit. Repatriation is allowed and both funds and interest thereon is free from all restrictions and can be transferred to NRE/FCNR accounts or investment outside India (see table). 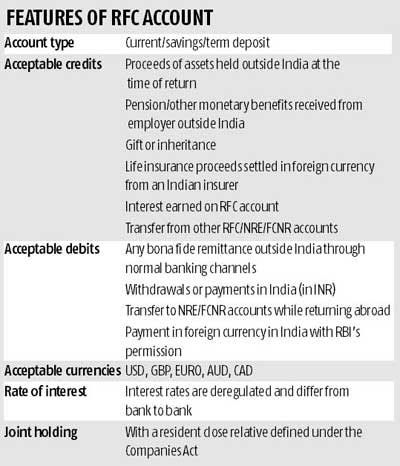 As per the Indian income tax law, the moment you become a resident Indian (which given the income tax rules generally happens a couple of years after you’re back in India), you start getting taxed on your ‘global income’. Of course, the benefit of Double Taxation Avoidance Agreements, or DTAA, may be availed if the overseas income is also getting taxed locally.

One good way you can hold the global tax liability as stated above is to plan your stay in India in such a way as to try to maintain Resident and Not Ordinary Resident (RNOR) status for the maximum possible time. In such a scenario, except for some incomes, rest of your foreign incomes will remain exempt from tax.

To avoid that, it’s wiser to explore the possibility of disposing off those assets before you earn Indian resident status. Also, note that the Supreme Court has clarified in the case of Keshav Mills Ltd. v. CIT [1953] 23 ITR 230 that income received outside India and remitted to India will not be considered ‘receipt’ and shall not be taxed in India. Some more ways to reduce tax liability on your return to India are:

Investing in tax-free bond issues announced from time to time

Other points to remember

Inform the respective companies from which you have purchased insurance or investments in India of the change in your status and new communication address. This will help the company to stop deducting the mandatory Tax Deduction at Source (TDS) on payouts at the rate of 30.9 per cent and there will be no glitches at the time of servicing.

If your income is above exemption limit, you will have to file your tax return. In case you hold foreign assets, you need to disclose details in your tax returns. Note that the Undisclosed Foreign Income and Assets (Imposition of New Tax) Bill, 2015 imposes stringent penalties for not doing so.

Look at your portfolio afresh, including insurance needs. Think before buying a residential house as it can lock a major portion of your savings towards retirement.