News
Business
Movies
Sports
Cricket
Get Ahead
Money Tips
Shopping
Sign in  |  Create a Rediffmail account
Rediff.com  » Business » The piece of glass you're looking for

The piece of glass you're looking for 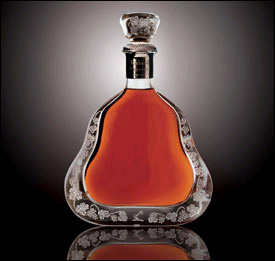 It's a moot point whether you would spend upwards of Rs 60,000 for a bottle of cognac ($1,400 in duty-free), but if it came in a flask that was original Baccarat, it's just possible that you might be tempted to flash your credit card a little more obligingly.

Therefore, when Mumbai-based Ashwin Deo, managing director of Moet Hennessy India, was happy to share a bottle of the rare Richard Hennessy with a small group of cognac punters in the capital, he resisted parting with the decanter despite good-natured pleading from a newly-acquired circle of admirers. That night, that Baccarat flask went home with Deo.

There's good reason not to part with the Richard Hennessy bottle, whether it's full or empty. For starters, because it's aged more than most cognacs with the oldest of its blends going back well over a hundred years, it's less common than you might imagine, and therefore there's a greater value to its premium so you end up paying anywhere between its original price to twice that. (And at Rs 7,000 a quaff, it's not unreasonable to imagine that you might be a little stingy when it comes to sharing its contents.)

Die-hard cognac veterans may be satisfied with those fumes gathered in a delicate tulip, but the upwardly mobile may be nouveau enough to covet the flask alone. It remains perhaps the only fine cognac packaged without a label, or any indication about its contents.

Only Hennessy fans would be able to recognise the shape of the bottle (just as Remy-lovers could recognise it from its distinctive silhouette alone). But like the old rich, the Richard Hennessy bottle prefers an elegant anonymity that only those with vintage value would recognise.

There's a good chance, though, that you might find yourself part of the band of cognac converts given the thrust Moet Hennessy is building. Part of this exercise was the visit, in the footsteps of wine and whisky preachers, of cognac expert Jean-Michel Cochet, Hennessy's product and brand head who takes you through a cognac tasting exercise with savoir-faire.

Starting with the VS, moving on to VSOP, to graduate with the XO (that's Very Special, Very Superior Old Pale and Extra Old for you philistines), he tells you to sniff, sniff again, roll it on the palate, feel it move down the gut, and experience it all over again, before moving on to savour the next option.

But Cochet's principal task is to change Indian mindsets. "Because of a shortage of cognacs in the last century," he explains, "the English had to restrict their cognac drinking, creating an after-dinner only culture intended for the cold weather."

The result is that cognac is treated like an after-dinner liqueur in Indian homes, while it is (blasphemously) a mainstream drink in China, Korea, Vietnam and Malaysia -- "all warm Asian countries", as Cochet laughs.

In fact, cognac can -- and is -- delightful as a cocktail (heavenly Sidecars were served as examples). You could have it on the rocks, with soda and ice, with water, even with tonic water (but not Schweppes; the dry Gymkhana variant is a better option).

Ashwin Deo says the company -- which represents the grand champagnes Dom Perignon, Moet & Chandon, Krug Grand Cuvee and Veuve Clicquot Brut Yellow -- is hopeful of growing its 4,000 cases of Hennessy sold in India, but it'll be some years before it becomes acceptable as a drink that isn't meant as mere bar decoration.

It's clear, therefore, that unlike wine, cognac is suitable for most cuisines of the world, including Indian. Cochet makes another point: "Instead of mixing drinks on any evening, you can choose to have only grape-based drinks." Cognac is made from grape wine through a process that involves storage in French oak casks that give it a distinctive flavour and colour.

It may take a while for cognacs to become hugely popular in the Indian market, but there's little doubt that the Richard Hennessy unmarked Baccarat flagon is well on its way to collectible status.