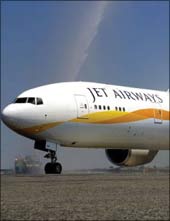 Even as Jet Airways's pilots and the management were hectically working out a settlement to end their stir on Friday, latest reports coming in say that pilots are not likely to return to work even on Saturday and the parleys would continue to break the deadlock that has severely disrupted flights affecting thousands of passengers.

Even as Jet Airways pilots and the management were hectically working out a settlement to end their stir on Friday, latest reports coming in say that pilots are not likely to return to work even on Saturday and the parleys would continue to break the deadlock that has severely disrupted flights affecting thousands of passengers.

The two sides held marathon talks before the Chief Labour Commissioner on Friday. The pilots and the management representatives came face to face for the first time since the stir started on Tuesday in the backdrop of a broad understanding reached by them last night through the mediation of Congress MP Sanjay Nirupam and some others.

Labour Minister Mallikarjun Kharge said he was confident of a solution, which he said he is expecting 'within 48 hours.'

The pilots' body National Aviators Guild is being represented by its president Capt Girish Kaushik and Capt Sam Thomas. Kaushik has expressed confidence of a quick solution.

As per the broad understanding, all the four sacked pilots are to be reinstated and the chargesheets issued against some of the agitators will be withdrawn while the Registrar of the Trade Unions will look into the fulfilment of criteria of registration of the NAG.

On their part, the pilots will join their duties once a formal agreement is arrived at before the Chief Labour Commissioner.

Late Thursday night, Jet chairman Naresh Goyal met Nirupam following which the broad understanding was arrived at. The outlines of this understanding were later approved with some changes by agitating pilots in Mumbai.

The Jet Airways management and National Aviators Guild made a breakthrough on Thursday night with a tentative draft which indicated the airline is likely to reinstate all the five pilots it had terminated, with some riders. However, a Jet spokesperson said: "Currently, we are not aware of any such move."

"Jet management has agreed to take back all the four pilots," said Congress leader Sanjay Nirupam, who said he was negotiating between the management and the pilots. It is expected that this draft agreement would be presented to the central labour commissioner on Saturday.

Earlier during the day, the Union Ministry of Labour stepped in as Jet Airways' protesting pilots hardened their stance over the dismissal of five employees and the right to form a union and took mass sick leave for the third day, forcing the airline to cancel over 160 domestic and 40 international flights.

It was a day of more drama with the NAG, representing 650 Jet pilots, drumming up support from labour unions across the political spectrum and the airline's cabin crew ground staff appealing to the pilots to return to work.

Indian Commercial Pilots Association (ICPA) and Indian Pilots Guild (IPG), the two commercial pilots' union of Air India, are supporting the Jet pilots. Union representatives of both ICPA and IPG have said that in case Air India puts in additional flights to take the Jet Airways' passengers, they are planning to tell their members not to pilot those flights. ICPA members today met NAG pilots in Delhi.

Chief Labour Commissioner S Mukhopadhyay and the Jet Airways management led by Executive Director Saroj Datta attended the first round of a reconciliation meeting today, in which the pilots were conspicuous by their absence. NAG Joint Secretary Sam Thomas alleged the pilots were not given notice to attend what he described as "management engineered talks".

Kharge, however, made it clear that the pilots had every right to form a union. "No one can deny the pilots the basic right to organise themselves in a union," he told reporters today.

Ministry officials added that sacking pilots -- two were sacked on Monday for refusing to submit to examination by company doctors --  in the middle of conciliation efforts was an unfair labour practice and would embarrass the management.

NAG today also submitted a plea in the Madras High Court for the court to take action against the Jet management for hiring foreign pilots when experienced and senior Indian pilots have been sacked -- two pilots were sacked last month, the original cause of the pilots' protest.

The guild also asked the court to monitor the airline's day-to-day and flight, wise operations since it was not taking passenger safety into consideration.

The Jet management, however, stuck to its position that the pilots should return to work and dissolve the union before talks could be held.

In New Delhi, the airline's cabin crew and ground-handling staff also held a press conference to appeal to the pilots to return to work. "Mr Goyal has said he will close the airline. What will happen to us?  The pilots have a lot of money to feed their family but we don't," said a representative of the ground handling team.

They however denied that they were acting under management pressure. The airline's bottomline losses would be over Rs 5 crore per day, according to Mahantesh Sabarad, an aviation analyst.

Meanwhile, in a letter to the CEO of Jet Airways, Wolfgang Prock Schauer, nine major trade unions said, "By preventing the pilots to form a union, you are violating their legal right to pursue legitimate trade union activities and infringing their fundamental right to freedom of association guaranteed to them and all citizens of India by the Constitution."

With additional inputs from Business Standard Contempt notice to Jet pilots; efforts on to end strike 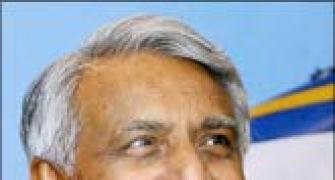 End strike or else, Jet chief to pilots 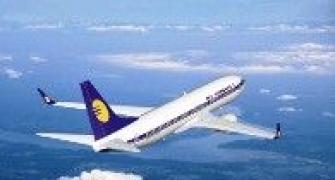 Jet suspends all flights between UAE and India A saga of Jet Air's controversies