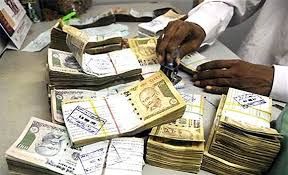 The rupee ended little changed on Monday after gaining in each of the previous four sessions as investors turned more cautious a day before a preliminary survey on China's manufacturing sector.

Worries about the health of China's economy have been a major drag in emerging market assets over the past week, while uncertainty also remains about the US Federal Reserve's near-zero interest rate policy.

Meanwhile, the rupee is also likely to remain range-bound ahead of the Reserve Bank of India's policy review on September 30.

Although the RBI is widely expected to keep interest rates unchanged, markets will focus on the tone of its statement.

"Rupee should be range-bound, given that we are seeing inflows and state-owned banks are buying (dollars)

Dollar sales by custodians were offset by greenback purchases by public sector banks, keeping the rupee in a range, according to traders.

Traders said foreign fund flows will also be a key for the rupee ahead of the Reserve Bank of India's policy review.

Foreign funds have bought debt and equity worth nearly $3.62 billion so far in September, as per regulatory data, bringing their total for the year to $33.65 billion.

© Copyright 2021 Reuters Limited. All rights reserved. Republication or redistribution of Reuters content, including by framing or similar means, is expressly prohibited without the prior written consent of Reuters. Reuters shall not be liable for any errors or delays in the content, or for any actions taken in reliance thereon.
Related News: Interbank Foreign Exchange, US, American
SHARE THIS STORY
Print this article