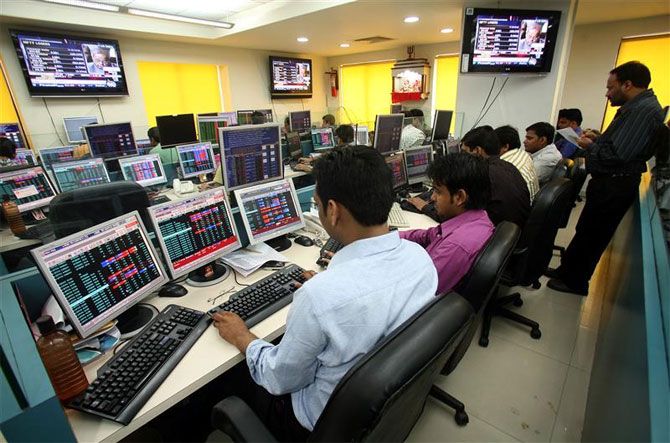 In the broader market, the BSE Midcap and Smallcap indices ended down 0.5%-1% each. Market breadth ended weak with 1496 losers and 1306 gainers on the BSE.

Foreign institutional investors were net sellers in equities worth Rs 946 crore on Friday, as per provisional stock exchange data.

European shares were trading lower on discouraging reports from select corporates even as shares of some Italian banks witnessed an uptick. The FTSE-100, DAX and CAC-40 were down 0.6%-0.8% each.

ICICI Bank ended nearly 7% higher after the Essar group on Saturday signed a binding agreement with Russia’s Rosneft, United Capital Partners and Trafigura Group Pte. to sell 98% in its most priced asset, the 20 million tonnes per annum Vadinar refinery and Vadinar port in Gujarat.

According to a Business Standard report, the proceeds of the sale will be used to repay loans of both foreign and local lenders, which was around Rs 88,000 crore, Ruia said. Axis Bank which is also a lender to the Essar Group was up nearly 2%.

Index heavyweights HDFC and Reliance Industries were among the top loser down 1.7% each along with Asian Paints and L&T.

Among others, Fortis Healthcare ended up 4% after the company on Saturday said it has completed the acquisition of 51% stake in Fortis Hospotel Ltd and acquired compulsorily convertible preference shares issued by Escort Heart Institute and Research Centre Ltd.

Shares of tyre manufacturers were under pressure, falling by up 6% on the BSE, on profit booking. Ceat, Goodyear India, Apollo Tyres, MRF and TVS Srichakra ended down between 1%-4%.

DCM surged 20% after the board approved the restructuring of its business including demerger of real estate business.

DCB Bank gained 3.5% after the bank reported 31% year on year (YoY) increase in net profit at Rs 48.9 crore for the quarter ended on September 30, 2016 (Q2FY17). The private lender had recorded a net profit of Rs 36.9 crore in the corresponding quarter of last fiscal.